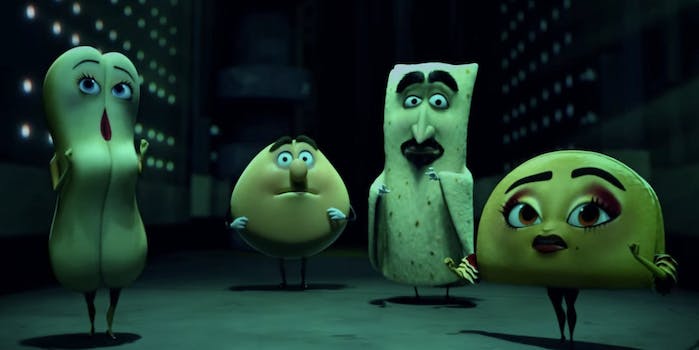 ‘Sausage Party’ was funnier when YouTube comedians made it last year

It's the same exact premise, minus the sexism and racism!

By now you may have heard some criticism of Seth Rogen‘s new animated film, Sausage Party.

Aside from the obvious sexism—the main characters are male sausages who long to get into the female buns they admire from afar at the supermarket where they live—the film has caught heat for being blatantly racist. Also, for completely screwing over some animators.

But the biggest flaw of Sausage Party may actually be that Rogen’s premise—that food doesn’t know it’s food—isn’t original at all. In fact, it’s already been done!

In a January 2015 sketch by UCB Comedy digital sketch team Also Also, a same-sex “couple” of tomatoes enjoys an evening at home with their garlic friends. The duos meet a gruesome and hilarious fate.

The premise of “Not Two” definitely holds up for a four-and-a-half minute sketch. And after watching it, we’re not so sure we need to stomach two full hours of weiners trying to get into buns.