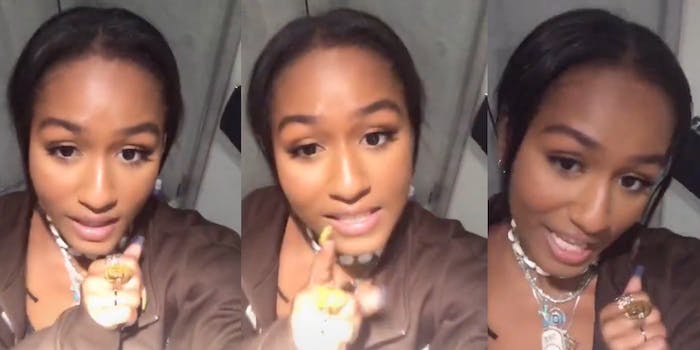 The former president's daughter raps along to one of social media's favorite songs.

Sasha Obama is trending on social media after a video of her lip-syncing to a popular rap song was discovered.

The former president’s daughter, 19, was shown rapping along to Moneybagg Yo’s “Said Sum” remix featuring DaBaby and City Girls, a song on TikTok that has gotten popular with more than 500,000 videos of TikTokers using it to soundtrack their clips.

The video, which has since been taken down, was uploaded by user @Cakethatsmg. The video quickly went viral as many were quick to recognize Obama in the video.

Many were also excited to see the 19-year-old simply living her best life and having fun with her friend, including City Girls rapper JT, who quote tweeted the video with a heart eyes emoji.

Fans also discovered more videos of Obama performing popular dances with friends on the app, which reportedly have been taken down.

“I thought I was tripping when I saw Sasha Obama in these but it’s definitely her, idk why they deleted them they weren’t that bad,” one user tweeted.

While some people enjoyed seeing the 19-year-old having fun on the app, many were quick to jump to Obama’s defense after the video began gaining widespread attention, with one user urging people to leave the Obama daughters alone and let them enjoy social media.

“It’s half baked racism to not allow the former first daughters to experience culture & things that normal kids (young adults) do,” one user tweeted.

Just like many college students, the former first daughter, who is a sophomore at the University of Michigan, is using the app as a form of entertainment during life in quarantine.

“Let the baby enjoy college, and be free – Management,” one user tweeted in the 19-year-old’s defense.