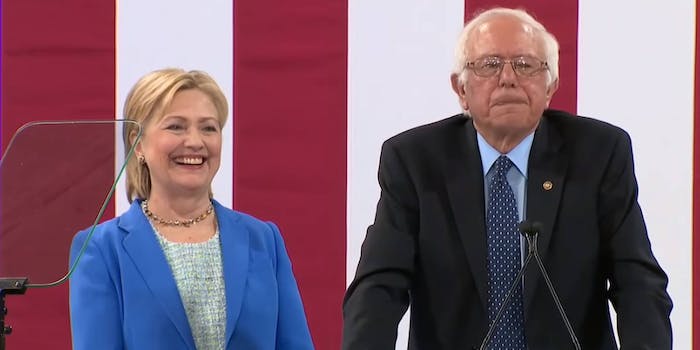 A group of Bernie Sanders fans are organizing an absurd protest toward Hillary Clinton’s nomination at the Democratic National Convention next week by creating the “world’s largest ‘fart-in.’”

Supporters and delegates of Sanders plan to eat a ton of beans and pass gas simultaneously with Clinton’s acceptance speech if nominated at the DNC in Philadelphia.

The protest is in retaliation of the senator’s endorsement of Clinton, and it will showcase the supporters’ discontent of the two major party candidates.

“It shows the level of absolute disgust that we’re at—we think we’re going to remember 2016 as the year we begin to bury the two corporate political parties,” organizer Cheri Honkala told U.S. News. “It’s really a shame—this whole thing does stink. Democrats and Republicans are like Pepsi and Coke. They listen to corporations, and they don’t listen to anti-poverty activists.”

Honkala, of the Poor People’s Economic Human Rights Campaign, announced the protest before Sanders endorsed Clinton, and she publicly supports the Green Party’s candidate Jill Stein— as she was Stein’s vice president pick in 2012.

Since announcing the gassy protest, the group’s office has received a variety of beans in the mail from across the nation to help prepare for the smelly event. Boxes of navy beans, baked beans, lima beans, and other high-fiber foods have been donated, and they will be a part of the day’s diet.

Feeding stations filled with the magical fruit for participants will be held in a camp called “Clintonville” that’s close by the convention venue.

According to Truthdig, Honkala will be inviting Sanders to participate, and anyone who wishes to be a part of “Beans for Hillary” can send cans to 1301-W Porter Street, Philadelphia, Pa., 19148.

The inspiration for the protest was from Saul D. Alinsky, a community organizer and activist who discussed his idea with Playboy magazine in 1972. Alinsky proposed a “flatulent blitzkrieg” in Rochester, N.Y., against photography company Eastman Kodak, but the “fart-in” never commenced.

“If this is the only way that we can really begin to talk about how our political system in this country stinks—with beans—then I say so be it,” Honkala told NBC News.

The Daily Dot reached out to Clinton’s campaign but did not immediately receive a comment.