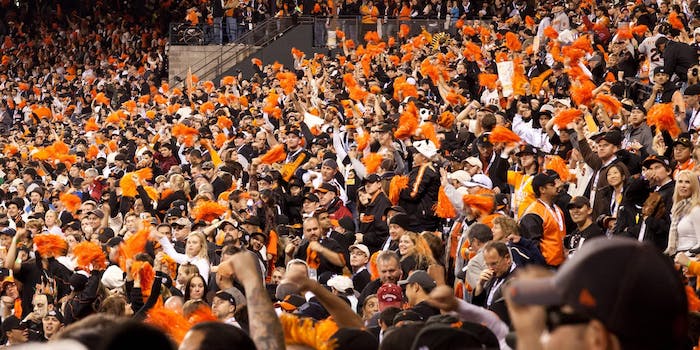 Get it together, kid.

You have to hand it to Fox Sports’ Erin Andrews for being able to roll with the punches.

After her much-discussed postgame interview with Seahawks DB Richard Sherman following the NFC Championship game against the 49ers, Andrews showed again her ability to show her improv chops—or in the case of her chat with San Francisco Giants catcher Buster Posey, her knack for following childish gibberish.

The Giants, now on their way to the World Series for the third time in five years, pulled off a ninth-inning, walk-off win against the St. Louis Cardinals thanks to a three-run blast from Travis Ishikawa. Speaking after the game with former two-time MVP Buster Posey, the chaotic scene turned nutso when Andrews noticed Posey’s son Lee in the player’s arms and told the youngster “to get it together” since his dad’s team was headed to Kansas City for the big prize.

Lee then took over the microphone and give his best Sam Kinison impression with a stream of gobbledygook that is being widely discussed on social media. Since the interview was being show on the big screen at AT&T Park, the crowd erupted with a roar as proud papa stood by and smiled.

In reaction to the non-speak, Andrews smiled, nodded her head, and gave viewers the impression she was intently listening to the sage wisdom of the prophets.

Maybe he was trying to predict the winner of the Series? We’ll never know. Game 1 goes down this Tuesday, Oct. 21.