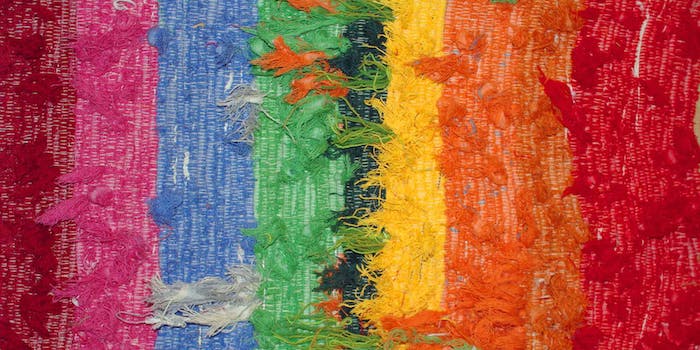 The most dangerous argument against same-sex marriage is totally wrong

Marriage equality has been SCOTUS-approved, and with it comes a wave of detractors, as any landmark decision commonly brings. In the past, LGBT people and their allies have critiqued the slippery slope logic that follows the legalization of same-sex marriage; conservative critics of equality have long cited hypothetical instances of incest or bestiality to demonize LGBTQ rights.

But one point in particular has stuck, mainly because it has nothing to do with ham-fisted, theological evangelism or launching a ridiculous strawman argument into the stratosphere—rather, their dispute has more to do with the debate over an increasingly acceptable practice. Polygamy, argue some conservatives, could follow same-sex marriage.

Historically, polygamy has been much more legitimized than same-sex marriage by societies. Logical next step. https://t.co/ClhKeIHoNK

Don't be surprised in the future if polygamy is normal and age gap in marriage doesn't matter. "If same-sex is allowed, why can't these be?"

Sure, the practice of polyamory—a stable and mutually beneficial romantic or sexual relationship between multiple parties—has its own critics. But polyamory, which is initiated after careful consent by all involved, isn’t what’s on the menu. The practice of polygamy is a vastly separate issue, with backlogs of horror stories by those who have been forced into arranged marriages for the benefit of the herd.

After polygamist, fundamentalist sect-leader Warren Jeffs was arrested and convicted of being an accessory to rape in September 2007 (he was later convicted of multiple child sex-abuse charges in 2011), one of his follower’s former wives, Carolyn Jessop, spoke out against the culture of fear that often accompanies instances of plural-marriage.

“The night my father told me [that I would be married], he made me sleep in my mother’s room,” Jessop told Time magazine in October that year. Arranged to be married to a man 32 years her senior (Merril Jessop, another of the Fundamentalist Latter Day Saints church’s leaders), Jessop recalled the horrific helplessness she and many of her sisters felt regarding their own positions.

“I wasn’t even able to tell my younger sister I was getting married and what was happening to me because they wouldn’t allow it,” added Jessop, who said that her wedding night felt more like rape than real marital relations. “Your salvation, basically, depends on whether your husband wants you in his life or not. … It was pretty obvious that the woman he liked to have sex with was the one who could get shoes for her kids and the basic necessities she needed, and the other women in the family had to just basically go without.”

Networks like TLC have tried to coax viewers into the divisive polygamy debate (take their hit show, Sister Wives). Polls like the one conducted by Gallup in May this year suggest that nationwide attitudes toward the subject have softened as well, with approval ratings inching upward some nine percentage points to an all-time high of 16 percent.

But even with the broadening acceptance of polygamous marriage, conservative politicians and pundits have made it a point to argue that favorable attitudes toward it are damaging in the long run.

Just last month, Republican presidential candidate Ben Carson told CNBC’s John Harwood that if LGBTQ couples were allowed to marry, it would open the doors for “other groups” to then appeal for marriage rights.

“Recognize that if you change the definition of marriage for one group, what do you say to the next group?” Carson posed to Harwood. “Do you say, ‘Well, we changed it for this group, but that’s it, we’re not changing it for anybody else.’ Does that seem fair?”

When asked who he meant in reference to other groups, Carson avoided the question, eventually conceding that bigamists or polygamists could then lobby for marriage rights.

In October 2013, after the state of Utah struck down a portion of a law banning polygamous marriage in response to a lawsuit brought by the stars of the TLC show Sister Wives, American Conservative columnist Rod Drehr boasted, “We told you so,” highlighting the fact that gay marriage discussions had led to a “slippery slope.”

“If Christianity and the Christian moral and societal framework is no longer viewed as normative in laws governing sexual practice, then the slippery slope to legalizing polygamy is here,” wrote Drehr in an op-ed. “We already know from the [2003 SCOTUS] Lawrence ruling (which invalidated sodomy laws) that the state may not regulate private consensual sexual conduct; if the principle that privileging Christian marital norms is impermissible is accepted, by what standard do we prevent polygamy?”

There is an inherent difference here that many of these conservatives fail to see: Legally speaking, marriage is a contract between two consenting individuals—both of whom can now be of the same gender. But that’s the catch that many anti-marriage equality advocates get caught up in.

Even in the rare instance that someone were to sue for the rights of three or more individuals to marry, it would destroy the entire legal process currently in place and force the courts to head back to the drawing board and re-write the entire contract. (Knowing our legal system, it’s a fair assumption that would never happen—no one likes mountains of paperwork, including those in power.)

And for those conservatives (and liberals, too) who worry over whether a gaggle of women in prairie dresses might turn up in court to sue for their rights, there’s a definite chance that the majority of Americans who fought so hard to achieve equality for LGBTQ individuals wouldn’t stand behind them due to the widely understood and deleterious effects that institutionalized polygamy brings with it.

There is room for debate over the next step in marriage equality, but it does not include legalizing polygamy—no matter what the talking heads might scare the public into falsely believing.

Melanie Schmitz is a writer and reporter for a number of websites, including HelloGiggles and Cinefilles. She has a background in Middle Eastern Studies and Journalism. You can reach her at [email protected]

Photo via procsilas/Flickr (CC BY 2.0)