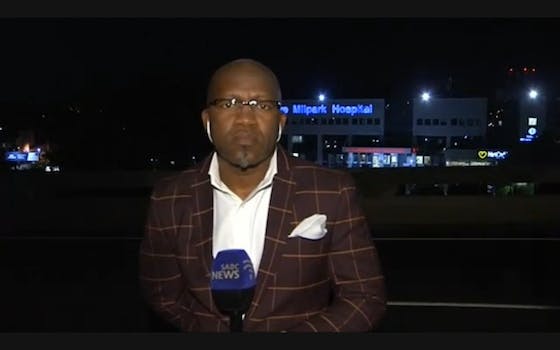 A journalist got mugged on-camera while waiting to go live

At first he thought it was a prank. Then it got scary.

An editor from the South African Broadcasting Corporation (SABC) found himself part of the story when he was mugged in front of the camera while waiting for his live shot to start.

Contributing editor Vuyo Mvoko was with foreign editor Sophie Mokoena and journalist Chriselda Lewis in front of Milpark Hospital to cover Zambian president Edgar Lungu’s arrival there. Two men started to circle him as he waited for the producers’ signal to go live. Initially, it looked like a simple photobomb, but it quickly turned confrontational.

Mvoko later explained on SABC that he initially thought they were messing around—until one of them asked for his phone. When he refused, the other man pulled out a gun. The journalists ended up giving the muggers two or three phones and a laptop.

“We are shocked at the brazen nature of the crime,” Gauteng police commissioner Lesetja Mothiba told SABC. “The cameraman managed to film the incident and the faces of the suspects could be clearly seen.”

Even though the incident aired on national television, police have been unable to apprehend the suspects.