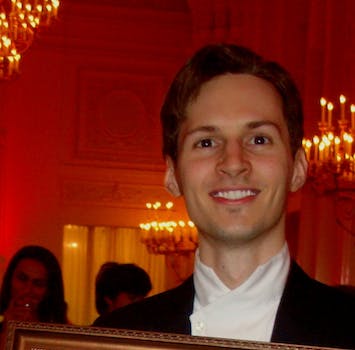 The reclusive millionaire founder of Russia’s hugely popular Facebook clone is under investigation for his possible role in a hit-and-run accident involving a police officer, authorities announced Wednesday.

Pavel Durov, often called Russia’s Mark Zuckerberg, is perhaps best known for a stunt last year, where he tossed paper airplanes made of cash from his office window, then watched with pleasure as pedestrians fought over them. Now local media are identifying Durov as the possible culprit in an April 5 incident at a traffic stop in St. Petersburg, when a driver in a white Mercedes ignored an order to stop and careened into a police officer

Durov, 28, says he’s innocent. But he’s not helping his case by being a brat about it on social media.

On Wednesday, Russian police announced they’d searched Durov’s home and the St. Petersburg offices of his company, VKontakte.  A company spokesperson said Durov had nothing to do with the incident and that he doesn’t own a car, much less a white Mercedes.

Some media are speculating the investigation may have ties to broader Internet crackdown in Russia.  But official interest in Durov may have more to do with his callous statements on social media. “When you drive over a policeman, it’s very important to drive back and forward a few times to squeeze out all the soft parts,” he wrote on his page, according to the AFP. Cops, predictably, didn’t find that joke very funny.

Durov, a self-described “libertarian,” has frequently tussled with Russian authorities since founding VKontakte in 2006. With 200 million users, the site has huge influence in Russia. It has frequently been accused, by both Russian and American authorites, of harboring digital pirates. Durov further infuriated Kremlin authorities in 2011 when he refused to ban opposition parties from his site.