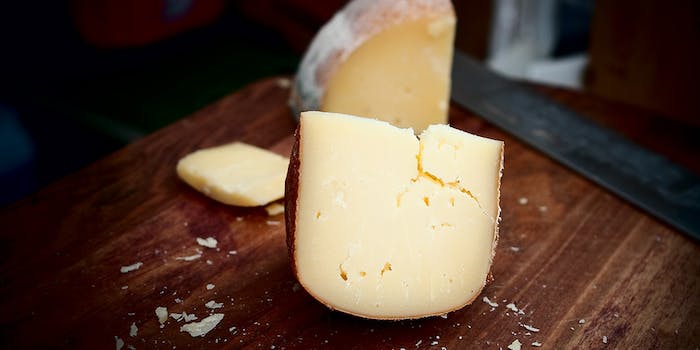 Russia destroys literally tons of fine cheese in the #Fromagicide

If Russian President Vladimir Putin‘s record of military expansionism and human-rights abuses hasn’t convinced you of his curdled character, then maybe his wholesale destruction of delicious European cheeses with a bulldozer will.

How did the tragedy of this so-called #Fromagicide come to pass? Well, it all began when the European Union and other countries adopted sanctions against Russia over that nasty Ukraine business a while back. In retaliation, Russia banned many food imports from those western nations, and just last week, Putin signed a decree calling for the incineration of such contraband, no matter how perfectly it pairs with a dry Pinot Gris.

If you think that’s bad, then brace yourself.

Europeans have been destroying their food products since last year in order to hedge against the price collapse brought on by the Russian bans. In August 2014, according to CNN, EU officials said they were “setting aside 125 million euros ($167 million) to compensate producers for not selling a range of perishable items, harvesting them before they ripen or leaving them to rot.”

Can there be any justice in a universe where premium cheese is sacrificed at the altar of diplomatic aggression? The answer, of course, is no. Anyone with some mozzarella, brie, havarti, or manchego on hand is hereby enjoined to savor every single bite. You never know if it might be your last.