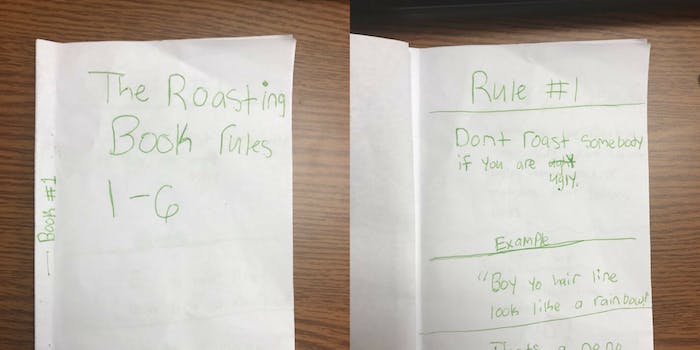 Don't ever cross paths with the author of this roast guide.

Trying to deliver the perfect roast to someone who deserves it, but don’t want to run the risk of looking stupid? Look no further than the internet’s latest favorite piece of literature—straight from the brains of babes.

On Wednesday, a middle school teacher named Neyce shared her latest, and undoubtedly most impressive, discovery of the students in her classroom: They had made a roasting how-to, a guide of sorts titled The Roasting Book Rules 1-6.

Yes, yes. The book looks like a few scribbles on green pen atop a few sheets of stapled paper, but as the adage goes, you can’t judge a roast book’s wisdom by its infantile cover.

Forreal, these kids are dropping some ridiculous, insightful knowledge that takes most adults years, if not decades, to learn. Just take a look:

Rule no. 1: Don’t roast somebody if you are ugly.

Example: “Boy yo hair line looks like a rainbow!”

That’s a no no if you don’t have a hairline.

Well, ok. Maybe not that line about being “ugly,” but there are a few prolific thoughts in this paperback:

When you are roasting make sure what you are saying makes sense, or matches that person’s look.

NO! I’ll roast you myself.

OK … clearly this author is some sort of roast leader? Roast jedi? Maybe a roastmaster, like a toastmaster, except instead of adults delivering speeches, they’re children making fun of your sneakers.

Don’t roast on somebody that has the ability to put people on hush mode.

Warning: Roast on your level.

If you know you only have a few jokes or they are not that funny, don’t roast or try to roast the funniest person. (Don’t get your feelings hurt.)

Don’t say the same thing that the other person already said.

You’re making yourself get roasted more than before, if you do that your best bet is to walk away. “If you do that.”

Don’t make excuses about why you got roasted later or roast on that person later behind their back.

Also don’t get mad and want to fight. Roasting is just a fun game but also can be taken too far. “So don’t.”

See?? These children already know so much more about humility, integrity, and being genuine than most adults who can’t seem to take warranted criticism.

Twitter lit aflame with these rules, too. After all, it is the prime platform for roasting strangers (or celebrities) via social media. Though, as rule No. 3 states, you don’t wanna go roasting, say, Chrissy Teigen or Cher—those women will roast you to hell and back.

Of course—these are just the rules. According to the front cover, the internet can look forward to learning just what to say while roasting in the series’ second book.

Now if only a few internet personalities would get along with these roasting rules, social media would probably be a much less toxic place (I’m looking at you, Twitter fingers).