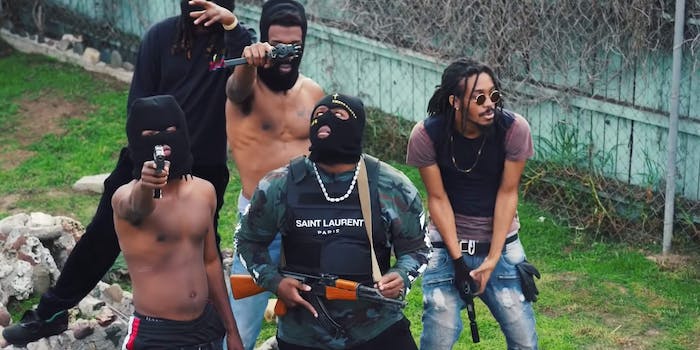 'To me, it's the most exciting thing I've heard in music in a long time.'

The influence of Lil Nas X’s “Old Town Road” has resulted in one of the first viral hits of 2020 being a country trap ballad featuring a sample of “Bless the Broken Road” by Rascal Flatts.

After the seminal, Grammy-winning track, it quickly became clear that this genre fusion was here to stay. Blanco Brown’s “The Git Up” continued the trend in late 2019 with the aid of the song going viral on TikTok with an accompanying dance challenge.

Artist RMR’s “Rascal” has been quickly gaining attention on Twitter due in part to the clashing imagery in the video and RMR’s wholly unconventional sound. The official video has been taken down on account of copyright claims but a re-upload of the video has since accumulated over 450,000 views. The original video was first removed on Saturday at approximately 500,000 views.

In “Rascal,” the currently anonymous RMR dons a balaclava, an Yves Saint Laurent bulletproof vest, and a puka shell necklace. Throughout the video, RMR brandishes an assault weapon all the while belting out some truly impressive vocals.

The phrases, “Fuck 12” and “Fuck them boys in blue” are sung in an unexpectedly dulcet tone given the cold, rough nature of the video.

The party that placed the copyright strike on the original video is UMPG Publishing, Rascal Flatts’ publisher. The takedown has caused the emergence of the #FreeRMR hashtag as well as an impassioned plea from musician and CEO of the Mosley Music Group record label Timbaland. “To me, it’s the most exciting thing I’ve heard in music in a long time. He’s my guy, free RMR. Put that video back up on YouTube, come on y’all,” Timbaland said in a recent Instagram post.

“Rascal”s continued virality through re-uploads proves that although he might have already experienced some setbacks due to copyright issues, RMR might be able to recreate some of the success and meme potential that his contemporaries in this genre fusion have experienced. RMR’s Drug Dealing Is A Lost Art EP is set to release in the near future.