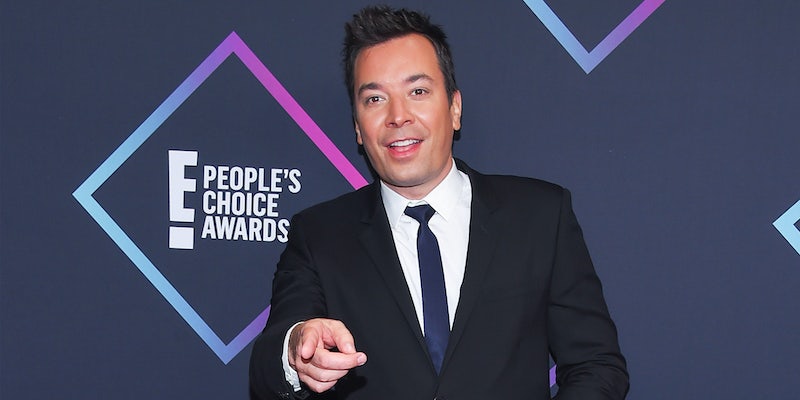 He's not dead, despite #RIPJimmyFallon trending.

The Tonight Show host Jimmy Fallon is alive and (presumably) well, something you might not immediately gather from seeing the trending hashtag #RIPJimmyFallon. And, in a small encapsulation of how easily misinformation can spread and Twitter’s apparent inability to curb much of it, Fallon’s attempt to get Twitter and Elon Musk to do something about it proved futile.

On Tuesday, several Twitter accounts started tweeting #RIPJimmyFallon with what appeared to be tributes to the late-night host. But there were immediate tells that the posts were satirical and not posting real information. One tweet, which Photoshopped Fallon onto a photo of Meme Heaven, noted a cause of death using the same joke name that someone posing as a fake Twitter employee used to trick reporters. Another tweet featured a photo of James Corden while posting Fallon’s dates of birth and alleged death.

And they were far from the only examples of people posting about Fallon’s death, most of whom were in on the joke. By 8:54pm ET, the aggregation Twitter account Pop Crave posted about the trend and included a screenshot indicating that over 3,000 tweets featured the hashtag #RIPJimmyFallon despite Fallon being alive.

Shortly after, Fallon tried appealing directly to Musk to get Twitter to do something about it, although Fallon isn’t specific about what he wants to happen.

“Elon, can you fix this?” Fallon asked.

Fallon’s attempt to bring the spread of misinformation—as in his “death”—via satirical tweets likely helped spread the hashtag further as some people used it to suggest that Fallon wasn’t actually the person tweeting from @jimmyfallon while others posited that his call to Musk was a prescheduled tweet that the real Fallon tweeted before he “died.”

It took until Wednesday morning for Musk to finally respond. And Musk didn’t seem to think there was anything wrong with it.

At least one of the viral tweets noting Fallon’s “death” has added context which informs people that the comedian is still alive, and once you dig into the #RIPJimmyFallon hashtag, the joking nature of the posts can also clue you in. But celebrities who’ve recently died trend on Twitter all the time, so it’s possible that someone just glancing at trending topics might come away thinking that Fallon actually died. (There’s at least one instance of someone who saw a satirical tweet and briefly thought it was real.)

Debunking claims that Fallon is dead are easy enough. But Fallon’s struggle to quell the hashtag and Musk’s indifference to Fallon having to combat misinformation is a minor (and easily provable) encapsulation of Twitter’s new normal. Some instances where people spread misinformation, such as impersonating pharmaceutical companies) or pretend to be Musk are swiftly dealt with. But other instances, such as a U.S. Senator inquiring about the Washington Post impersonating him for an article, are seemingly allowed or are met with trolling or indifference by Musk.

Boosted by tens of thousands of posts using the hashtag, #RIPJimmyFallon trended on Twitter for several hours.