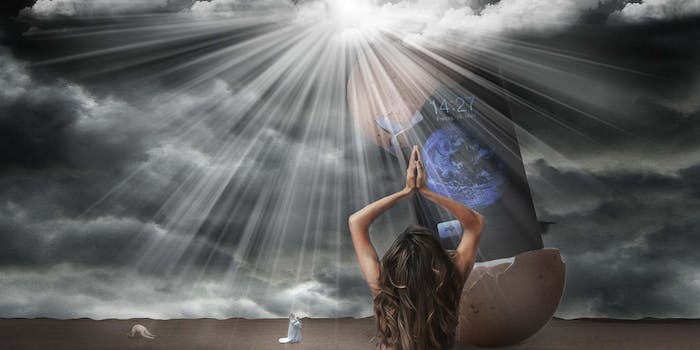 Never fear, a vibrating ring is here to make us all more sexist

Ringly speaks to a fascinatingly patronizing approach to women and technology.

One of the things I am most militant about when I am out with friends is this: If you are spending time with me, you are spending it with me, not your phone. I can and will walk out on people who appear more interested in their phones than my company, and I’ve done it on numerous occasions. I have better things to do with my time than sit around and watch my supposed conversation or dinner partner use a phone the whole time.

I feel extremely strongly about this. There are, of course, exceptions. Doctors and other first responders who are on call, for example, obviously need to be able to answer their phones when it’s work calling. Likewise, parents should pick up when their children call in case it’s an emergency. If you’re the editor on duty babysitting the paper over the weekend, naturally, you’ve got to pick up if someone from the press crew (haha remember when newspapers were printed on paper?) calls, or your online editor is in a panic over something that’s going wrong.

But if I’m so boring that you need to text someone else, check Twitter, or look at your email, why hang out with me?

At one point in time, answering phones in company (or playing with smart phones) wasn’t considered appropriate. Then there was a big cultural shift, and now everyone’s doing it—except that sometimes it seems like I’m starting to feel a bit of a backlash. People play games where they stack their phones at the table to discourage their use, for example, while the UNICEF Tap Project donates clean drinking water if you can set your phone down long enough. This tells me that there’s a growing understanding of the way phones are changing our interactions, and that at least some of us are beginning to think phones might be having a negative effect on our lives.

And, inevitably, technology is arriving to filter out the important calls, texts, and notifications—you know, the must-haves. I get that for the exceptions above (my doctor friends all have their work numbers on their “always ring” list, for example), but the waters get a whole lot muddier when you’re talking about your Twitter @replies, or Facebook notifications, or texts from your other, cooler friends. As people try to get more stealthy about the fact that their attention isn’t on the people they’re with, products are arising to accommodate that desire, and phone settings themselves allow people to do this with growing ease.

Enter Ringly, designed just for ladies. It’s a ring made with semi-precious gemstones that can be set to vibrate or light up in response to specific phone calls, texts, and push notifications. That way, women don’t have to look down at their phone constantly to filter what’s more important: The phone or the person they’re talking to. Now, they can count on their trusty statement jewelry to do it for them!

Ringly speaks to a fascinatingly patronizing approach to women and technology. Of course, women wouldn’t want to be as gauche as to check their phones in social situations, especially conversations with men, whom they should be paying close attention to at all times. Yet, women are also flighty, easily distracted creatures, you know, who need to be constantly looking over their date’s shoulders for the next thing. They need to be reassured that they’re not missing something important! What if that notification is for a sale at Anthropologie?

Creating a shiny object that doubles as a pager is the perfect solution, right, ladies? This way, you can keep up with all the demands on your time that have been created through a culture of constant availability, all while being discreet about it. As though there’s something discreet about a giant buzzing emerald on your finger. (Am I the only one who immediately thought of extracurricular applications for a vibrating ring? No? Carry on, then.)

This technology seems to imply that men are Very Busy and Important and can, thus, be expected to interrupt conversations, dates, dinner, and other events to take calls, check their email, and engage in similar activities. Women, meanwhile, need to be more discreet, and more discerning, when it comes to using their devices in social settings, lest they cause offense. Men certainly aren’t criticized as much for not putting their phones down, even in intimate settings (I would just like to point out for the record that 20 percent of young adults of all genders admit to having used their phones during sex, which, people, WHAT ARE YOU DOING?)

Men, after all, are the heads of companies. They’re managers. They play a key role in team and social leadership. Their expertise might be needed at any time, anywhere, but more than that, as men, they get to decide how their time is most valuably spent. And that might involve hovering over a phone during what’s supposed to be a casual social get-together, because, well, it’s just not exciting enough, or he’s trying to hook up with his latest Grindr or Tinder conquest, or he wants to keep his options for the evening open.

If I had my way, everyone would put down their damn phones and focus on each other. But if people aren’t going to do that, then they at least need to be equitable about it. If men can constantly whip it out and peruse, then so can women, and they don’t need to wear a ridiculous light-up ring to filter their phone activity.

Of course, ladies who want to wear light-up, vibrating statement jewelry just because are totally welcome to, and more power to you, my friends. May your star shine ever brighter.