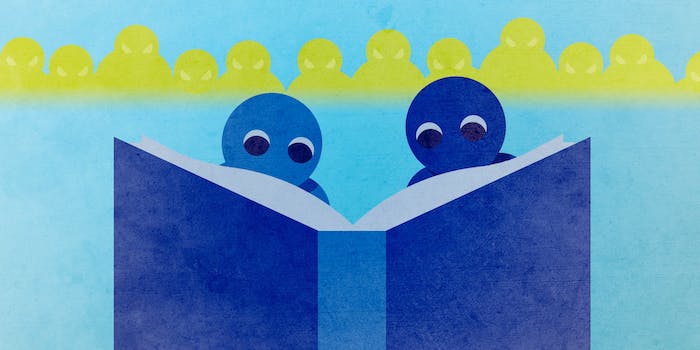 The right to read anonymously is in danger

Reading used to mean translating symbols on the page to ideas in your brain. But now? Even as you extract semantic value from these words on your screen, you are being read. You are now an open book.

“The future of anonymous reading… [is] very much in jeopardy,” Alison Macrina of the Library Freedom Project told me recently.

We all know (or should know) by now that the government is watching and recording everything we read online. The Edward Snowden docs made that clear. What many fail to realize, however, is that this spying extends to the books we read as well—even into one of the last bastions of democracy, public libraries.

Libraries have long since abandoned paper-based record keeping in favor of digital borrowing records, which are vulnerable to hacking or government demands for data. But librarians are fighting back.

“Thanks to the passage of the USA PATRIOT Act [that permits the FBI to demand library records in secret], libraries decided en masse to start purging those records,” Macrina said. “If the information is not kept, it cannot be subpoenaed by something like a National Security Letter.”

“The harder thing of course is to keep records of digital resources safe,” she added, “which is not just an issue of their data trails within the library, but the fact that many of those digital resources [ie. e-books] are negotiated through third parties,” like Amazon, Adobe, and OverDrive.

Remember PRISM? The government need only issue Amazon a 702 FISA order to force the company to provide a real-time data feed, accompanied by a gag order.

Amazon of course denies this. When they became the last tech company in the Fortune 500 to issue a transparency report in 2015, their blog post insisted that “Amazon never participated in the NSA’s PRISM program.” Waggish minds might wonder, if that’s the case then what NSA program did Amazon participate in? Indeed, the transparency report listed “0-249” national security requests received, which prompted ACLU technologist Chris Soghoian to tweet:

Know enough about what a person reads and you can sell them the next hot bodice-ripper or drone them to death for thought crime.

Seeds of hope sprout even as you, reading this, are read. Not a lot of hope, mind you. But some. Better than nothing. And that hope begins with a word that scares some people, a word associated more often with darkness or deepness (depending on how obscure or profound you prefer your metaphors), that provoke many to think of online drug markets, child pornographers, and, horror of horrors, Bitcoin: Tor.

Yes, Tor, and the other anonymity networks proposed and in development, offer a slim chance of blinding the panopticon and freeing us all from that open-air prison so few—still!—perceive hemming us in on all sides.

Tor, you think. Oh, right. What on earth would I want with that? What good does that do me?

The darky-deep deepy-darkness of Tor hides not just creepy criminals but also, and rather more importantly, it hides your lawful activity from the prying eyes of the creepy criminals in the national surveillance state. Cause quite frankly what books I read is none of the government’s fucking business. Especially not if we want to continue calling ourselves a free society.

Three recent experiments offer a path of resistance. The aptly-named Library Freedom Project is installing Tor servers in libraries to contribute bandwidth to the Tor network, and encouraging libraries to install Tor Browser on library computers, so patrons can read anonymously.

The Torist in January launched the deepy-dark web’s first literary magazine, hosted on a Tor hidden service, and accessible only over Tor at this onion address. (Full disclosure: The Torist’s first issue includes an excerpt of my anti-surveillance novel, The United States of Air.)

And Sci-Hub, “the first pirate website in the world to provide mass and public access to tens of millions of research papers,” now offers their growing stash of 47 million scientific research papers on their Tor hidden service (link requires Tor Browser to view). Because as one scientist argued, “Publishing science behind paywalls is immoral.”

Not just science. How can art, creativity, learning of any kind flourish under the withering gaze of cover-their-ass espiocrats and corporatist flacks intent on shilling the latest gizmo or gewgaw?

The pseudonymous editor of The Torist, GMH, said it best: “Acts of reading and learning are perhaps the most sacred that people perform on the Internet.”

These initiatives point the way toward recovery from our fallen state, but are no cure-all. Glittering content such as mine is nothing more than a lure to attract you: The prey. This is not a technical problem, but a business and political problem. Anonymity technology could eventually be deployed at global scale, but then how would websites make money?

Targeted advertising is the predominant business model of the Internet. Only by surveilling readers—by reading readers in turn—can advertisers achieve a satisfactory ROI. Absent such advertising revenue, many online publishers would go bankrupt.

No clear solution to this thorny problem has yet to emerge. That’s why libraries, funded by taxpayers and not subject to the whims of the market, may offer our best hope.

Indeed, Macrina remains optimistic that libraries are the future of anonymous reading.

“On the bright side, the push for privacy in libraries is growing exponentially,” she told me. “So many libraries are prioritizing privacy…that, to me, is the really exciting frontier of the future of anonymous reading…libraries providing information and training on anonymity tools so that they can help the public use and adopt them.”

J.M. Porup is a freelance cybersecurity reporter who lives in Toronto. When he dies his epitaph will simply read “assume breach.” Follow him on Twitter at@toholdaquill.