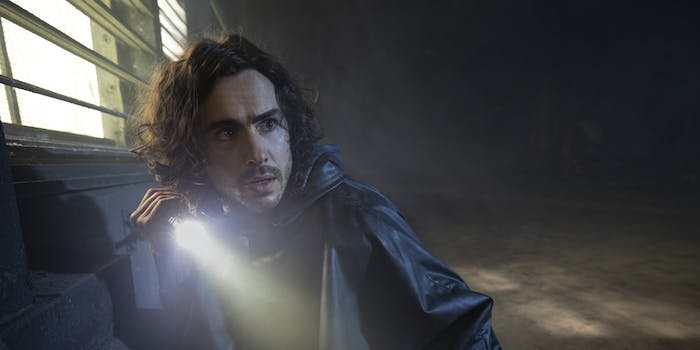 Adapted from the comic book series, this apocalyptic drama envisions a world without cisgender men.

Y: The Last Man covers a lot of familiar beats for apocalyptic fiction: the existential panic, the struggles over dwindling resources, the unexpected relationships that stem from a desire to survive. It’s a more logistical show than one might expect from its high-concept premise, which involves the sudden death of every living creature with a Y chromosome. 27-year-old slacker Yorick Brown (Ben Schnetzer) is the only cisgender man left alive, but despite the show’s title, he’s just one facet of a complex drama exploring societal collapse.

RELEASE DATE: Sept. 13, 2021
CREATOR: Eliza Clark
STREAMING: FX on Hulu
After a mysterious plague kills every creature with a Y chromosome, the world is sent into turmoil. Ben Schnetzer stars as the last cisgender man in post-apocalyptic America, in a dystopian drama that combines thoughtful worldbuilding with commentary on sex and gender.

Storytellers have long attempted to imagine a world without men, either through matriarchal societies like Wonder Woman‘s Themyscira, or dystopian scenarios like the one envisioned here. Led by showrunner Eliza Clark, FX’s Y: The Last Man offers a more nuanced, trans-inclusive vision than the original comics by Brian K. Vaughan and Pia Guerra. The writers’ room includes transgender sci-fi novelist Charlie Jane Anders, and the creative team sought input from trans consultants and GLAAD, adding a trans man character to the main cast: Sam Jordan, played by Elliot Fletcher. There’s a visible effort to push back against the story’s problematic subtext, satirized by writer Daniel Lavery last year: “Welcome to the feminist sci-fi future, where it turns out your chromosomes were pretty much right about everything all along.”

Y: The Last Man obviously can’t escape this piece of core worldbuilding, wherein a Y chromosome is a death sentence. It’s a dystopia where every trans woman is dead, along with millions of intersex and nonbinary people whose disappearance is overshadowed by the death of the patriarchy. So when it comes to the show’s gender politics, your mileage may vary. The narrative makes it clear that sex and gender are a spectrum, and that Yorick is not actually “the last man.” At the same time, this scenario inevitably forces every trans man to live in fear. Characters like Sam struggle to find testosterone on the black market, and every new social interaction is fraught with tension. He’s automatically outed to every stranger he meets, an experience that Yorick occasionally shares because people assume he must be trans as well.

Following the adage that every society is three meals away from chaos, Y: The Last Man‘s apocalyptic fallout is grounded in realism. America’s infrastructure collapses in a matter of days, not just because 50% of the workforce is dead, but because a lot of crucial industries (sewage, power plants, agriculture) are male-dominated fields. In the foreground, we follow a selection of viewpoints including Yorick’s self-destructive older sister (a paramedic played by Olivia Thirlby), a single mother (Marin Ireland), and a Meghan McCain-alike Republican (Amber Tamblyn) whose entire identity is built around femininity and motherhood. Our final main character is the new president (Diane Lane), whose rise to power is reminiscent of Battlestar Galactica‘s Laura Roslin.

Yorick is a deceptively well-observed protagonist. Before the apocalypse, he was an underemployed escape artist whose parents paid the rent on his cool Brooklyn apartment. Predictably, he’s dating a much more accomplished woman who seems ready to move onto greener pastures. Likeable but unimpressive, he embodies the concept of an Okay Boyfriend.

When the apocalypse hits, he flounders in confusion until he gets picked up by a mysterious government agent named 355 (Ashley Romans). Yorick is, after all, a crucial resource for the future of humankind. Ashley Romans and Ben Schnetzer’s performances are what really made the show click for me, because on paper, both characters could easily be kind of generic. Yorick is a useless white guy who becomes the most important person on earth, aping the cliché of bland Chosen One heroes. Meanwhile, Agent 355 is an effortlessly cool badass with an arsenal of convenient survival skills; a superhero in a landscape of normies. Yet Schnetzer brings a sense of painful realism to Yorick’s stupidity and panic, while Romans brings a witty, enigmatic edge to 355’s super-spy archetype. Used to working alone, 355 can mold herself to fit any situation—and keep herself entertained. Her subtle, self-directed sense of humor shines through alongside her brutal pragmatism, making her the most watchable character in a show that’s largely free of traditional jokes.

At the risk of stating the obvious, Y: The Last Man is one for fans of serious dystopian fiction. Rather than being a drama about “what society would be like if women were in charge” (a rather facile question), it’s a thought experiment about an epic natural disaster. Rooted in contemporary American politics, the government defaults to authoritarianism while the population defaults to anti-government conspiracy theories. Guns are everywhere, and traumatized survivors are guided by the values and biases of the old world. It is not, in other words, particularly fun to watch. I found myself drawing a lot of comparisons with 2003’s Battlestar Galactica, which covered much of the same territory in a more entertaining way. But Y: The Last Man still gets off to a promising start, coupling thoughtful worldbuilding with a strong, character-driven story.