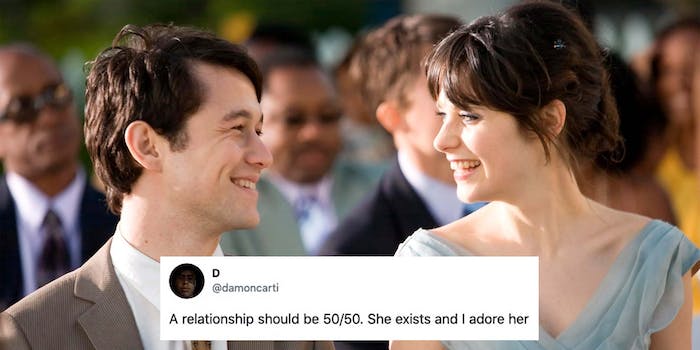 Some people took the meme more literally than others.

Relationships are hard work, and should ideally consist of mutual efforts between two partners to be successful. When it comes to emotional and physical needs, communication, trust, and so on—a relationship should be 50/50. If both partners aren’t putting in an equal effort, they’re basically setting themselves up for failure.

But that’s not what this new meme making its way around Twitter is about. Not exactly, anyway! The meme parodies that key principle and applies it to theoretically unhealthy relationships. The basic setup essentially starts out, “a relationship should be 50/50,” and then follows with a Shyamalan Twist that is anything but!

The meme seems to have originated on Sept. 16, when user @yam_url tweeted, “A relationship should be 50/50. She‘s buying me the PS5 and I‘m buying her one iced coffee.”

Clearly, the joke here is that a PlayStation 5, which will retail for $499.99, is not equal to buying someone a single iced coffee, which costs maybe five bucks, at most. At any rate, the tweet quickly went viral, accumulating over 40,000 retweets in a couple of weeks. Others began contributing their own “a relationship should be 50/50” tweets.

Others got even more absurd or facetious with the meme, referencing everything from the Adam Sandler, Drew Barrymore rom-com 50 First Dates to thirsting at Harry Styles.

Even the official Twitter account of the Kum & Go convenience store chain had a contribution to the “a realtionship should be 50/50” meme. Weird flex but sure, why not?