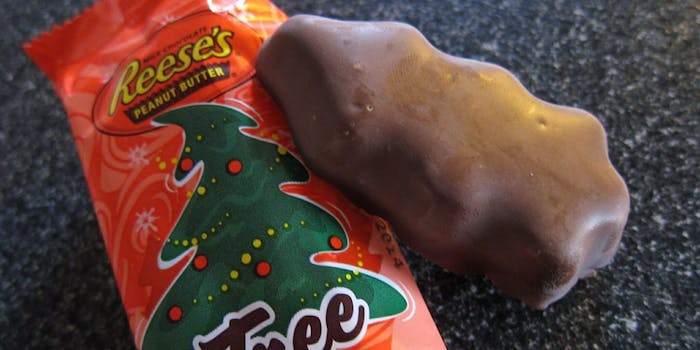 Do these Reese’s peanut butter Christmas trees look like poop or what?

Tis the season to be blobby.

Every year heading into the Yuletide season, the holiday purists emerge from their long slumber to complain about the multitude of aesthetic imperfections the season brings with it. You know, like neighbors with too many lights in their yard, obnoxious carolers, and Christmas-tree-shaped candy that doesn’t look sufficiently tree-like.

Here’s the official photo of the candy, which doesn’t exactly inspire us to gather around and sing “Welcome Christmas.” But as nebulous as the official “peanut butter tree” concept seems to be, the reality is apparently far worse—at least according to these complainers:

ah, the fabled blob tree. truly the most majestic of foliage. @ReesesPBCups pic.twitter.com/jj24RvBnH4

— Annoyed By Everything (@AnnoyedByEVRTHG) November 2, 2015

Then there are the brave souls who are actually coming out and saying that these peanut butter trees look like turds:

It’s true; they clearly look like turds. Then again, so does most chocolate you find in your stocking or your Halloween bucket or any other receptacle of cheap commercial holiday chocolate. Sure, the world is currently going to hell, but feel free to complain that your first-world candy isn’t shaped right.

Fortunately, the candy backlash has provoked its own backlash.

If you are unhappy about the shape of your #Reeses Peanut Butter Christmas Tree, you can send it to me. I will dispose of it properly!

Seriously, folks. Leave us the inferior blobs of creamy peanut butter goodness. If it’s Reese’s-inspired seasonal decor you’re after, you have plenty of other things to choose from:

Yummmmm. I could really go for some poo-shaped chocolate right now, couldn’t you?