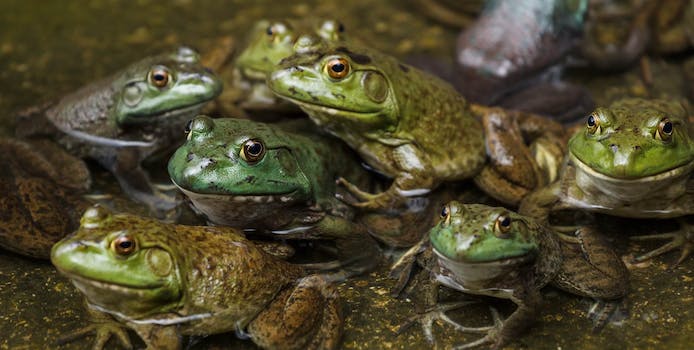 Once again, dump him!

A post in the subreddit r/relationships may have just featured the strangest ultimatum yet. Reddit user chirpchirping, a biologist and avid frog keeper, came to the sub looking for help after her boyfriend told her it was him or the frogs.

A couple of years ago, OP discovered she really loved frogs and started adopting pet ones no longer wanted by their owners. Over the course of the last few years, she suffered a severe bout of depression and lost most of her friends. However, her frogs have carried her through it by providing her with a reason to get up in the morning and keep going. At this point, she has 14 pet frogs whom she loves like children.

She also, unfortunately, has a boyfriend who doesn’t like the frogs. The two of them have been together for six months and he’s apparently “not a huge fan of animals.” Now that he’s moving for grad school, he wants OP to come with him and to live together in a new city. And he wants her to leave the frogs behind.

To avoid anyone granting him benefit of the doubt, it’s clear that OP’s boyfriend is neither afraid of nor allergic to the animals. He just hates them because, in his own words, “they’re ugly” and he doesn’t want to share a house with them.

Even when OP offered to pay extra rent so they could have a spare room dedicated entirely to the frogs so he’d never have to see them, he held firm on the position that if she wanted to live with him, she could have three frogs and no more. She would have to rehome the rest.

OP is naturally heartbroken and, not knowing how to choose between her partner and her frogs, sought out the good people of Reddit to help her decide.

Reddit didn’t struggle with the decision at all, however, and a resounding chorus of “dump him” occurred.

After all, as one redditor pointed out, college is the ideal time and place to find someone who loves frogs just as much as you do.

And six months is barely any time at all when it comes to relationships.

Especially with someone who wants you to get rid of your pets.

Something which is often a red flag for future abuse in the relationship, as quite a lot of redditors were quick to point out.

Though she initially intended to keep working toward a better compromise, one that would let her keep half, OP appeared to change her mind as the discussion continued. Eventually, she decided that if he wasn’t going to come around on the matter of her frogs it was time for the two of them to part ways and “seek attention elsewhere.”

Good for you, OP.