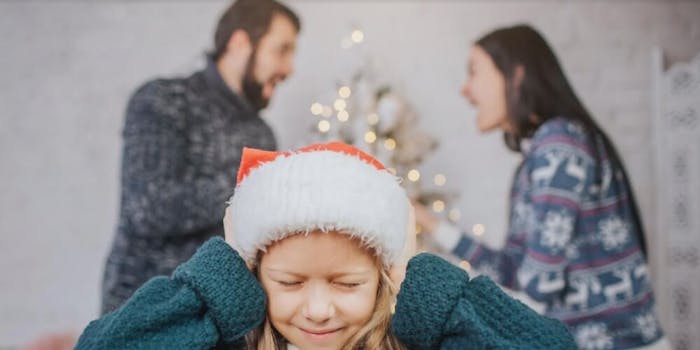 People are defending a redditor who canceled Christmas after her family told her she doesn’t “contribute” to the family since she doesn’t have children.

The redditor posted about the incident to the subreddit “Am I The Asshole,” which is where people post stories anonymously to try and find out if they’re the asshole in a difficult situation.

Though the original post has been removed from the subreddit on the grounds that it’s too much of a “revenge story,” Twitter user @AITA_reddit grabbed screenshots and shared them on Twitter.

AITA for ruining Christmas & NYE because I was removed from my mom and dad's wills? https://t.co/lDiFQDHQS1 pic.twitter.com/wN63z8bU67

In the post, the woman explains that she and her husband have the biggest house and kitchen in the family, so they host every holiday. She added that they don’t just provide somewhere to crash. They also pay for most of the food and handle most of the cooking. On top of this, she wrote that they are, “always left with a trashed house.”

This all seems pretty generous, but apparently her family disagrees. In their family, it seems like it’s childbirth or nothing.

Things kicked off when the redditor’s father questioned her, yet again, about children during Thanksgiving. Becoming angry about her response on potential grandchildren, he said, “Well if you’re not going to contribute to this family, why should you be included in our wills? Don’t like it? Too bad. Deal with it.”

Despite the fact that the family was sitting in her living room and eating her food, everyone agreed with the father. So, the redditor decided she’d had enough.

She went around the house collecting the family’s things. Her husband joined in and helped her deposit them in the middle of the living room.

“Since we apparently don’t contribute to this family, no one should be upset that our home is now closed. You may all leave now,” she told the family members sitting in the room.

I'm sorry her family is terrible, but I love that she was just like, "Fine. Get out." I want to see way more of these strong boundaries in 2020. The posts where people let family walk over them for YEARS break my heart.

She gave her family only about 30 minutes to get going. When they complained about the short notice, she just echoed her father’s words.

The absolute beauty of clear boundaries. Children are not “contributions” to this family.

In the Reddit post, she explained that she wasn’t upset about possibly being removed from the will. Instead, she said was angry that they didn’t appreciate the things she did for them and didn’t see her value outside of children.

Just days after the incident, her family started making plans to come to her house for Christmas. That’s when she reminded them that she and her husband would not be hosting this year–and things blew up. Instead of apologizing, her family responded by calling her names on multiple social media platforms. In the end, she wrote that the family didn’t have a Christmas gathering.

The redditor said she believes she did nothing wrong, but just in case, she turned to the subreddit for some reassurance.

While a few people responded with ESH (everybody sucks here) on the grounds that she should have given them longer to clear out, almost everyone agrees that not only was she not the asshole but actually she’s an inspiration.

Several people couldn’t get over the sheer entitlement of her family.

“Do not bite the hand that feeds. I wouldn’t want those ungrateful assholes staying at my house, either,” redditor @bluetrench wrote.

There was also a degree of disgust over her father’s attitude toward childbearing–both his disregard of her bodily autonomy and his treatment of children as objects rather than human beings.

“How is having children ‘contributing’? It’s messed up because he’s treating his grandkids like objects rather than people,” redditor @Tutsani wrote. “Besides, you have the right to do whatever you and your husband want as a couple, and it’s nobody else’s business. I think you’ve done nothing wrong tbh.”

Ultimately, it was clear to all that it wasn’t the redditor who ruined the festive season–but her Dad.