Cleveland won the No. 1 NBA draft pick, and this guy now has to eat his own poop

NBA fans promised to do unspeakable things if Cleveland won the draft. Guess what happened.

The Cleveland Cavaliers won the NBA lottery last night. They now own the rights to the No. 1 draft pick—for the third time in four years. Also, the Internet’s a bunch of dishonorable flakes. Hard to determine which statement we’re stressing more.

Online, a scrum of silent shouters went hog-wild over the news, demanding to know of any and all conspiracies, calling Cleveland, a team that’s never won a championship and only gone to 18 playoffs in its 43-year existence, “the luckiest franchise ever.” 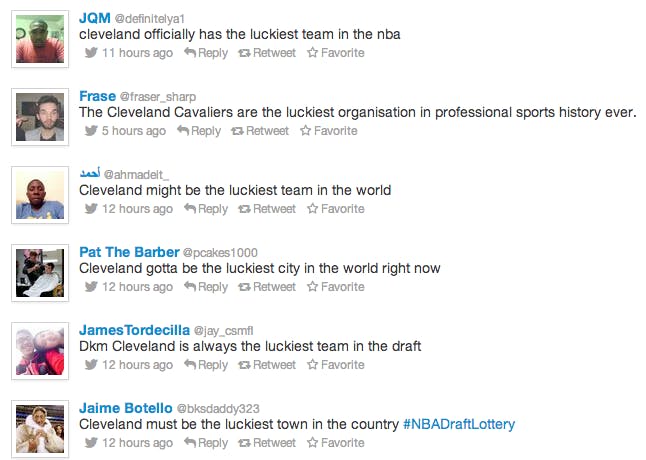 That’s all lip service. Twitter has a way of forgetting what you said quite quickly. Across the Internet on Reddit, the things you say may more likely be better held against you.

It’s for that reason that a few frequenters to subreddit r/NBA are scrambling this morning, ignoring demands from their fellow redditors. They had made promises to go through with some crazy shit should Cleveland win the lottery. And guess what.

One Cavs fan, eGraffiti, wrote last night that he’d consume his own urine should his team take the top pick. “I will deliver,” he wrote. Up all night commenting elsewhere on the draft, eGraffiti hasn’t been seen around the thread on which the pledge was made.

The same thing’s going on with hashcrack, who promised to “chop [his] nuts off” should the Cavs win again. A number of his constituents have demanded, but hash crack’s been more hesitant. “I need some time to think about this,” he wrote. Nobody on Reddit has heard from hashcrack since.

One redditor’s been more eager to follow up. At least, he’s better swerved around his promise. Meet timberwolvesguy, presumably from Minnesota, who promised to “eat his own shit” if the Cavs won the lottery. Tagged, he tried to flip the task around, telling everybody that it’s a team effort. They’re all in it together.

Timberwolvesguy tried to diffuse the situation by transferring over to a conversation about the size of Kate Upton’s bra cup (who isn’t?), but was found shortly thereafter by a redditor named BetCollectorGuy, who said that he’d “follow timberwolvesguy until it’s payed (sic).” That’s when timberwolvesguy went into full-on backtrack mode.

Back in r/NBA, the potential poop eater posted that he’d talked to the mods of the subreddit, who’d informed him that he could not post any footage of his own fecal feast because “poop eating is not NBA related.”

“So it can’t happen,” he added. But it doesn’t appear he’s in the clear quite yet.

The conversation’s since followed timberwolvesguy into a subreddit dedicated to Pokémon, where he’s already owned up to the fact that he promised he’d eat his poop. Additionally, one redditor has created a shadow account for timberwolvesguy: timberwoivesguy (with an “i”), who’s trying to keep the challenge going.

We’ll keep you up to date as this saga unfolds. In the meantime, we’ve got word out to r/NBA mods in an effort to, hopefully, determine once and for all whether eating excrement is allowed on site.