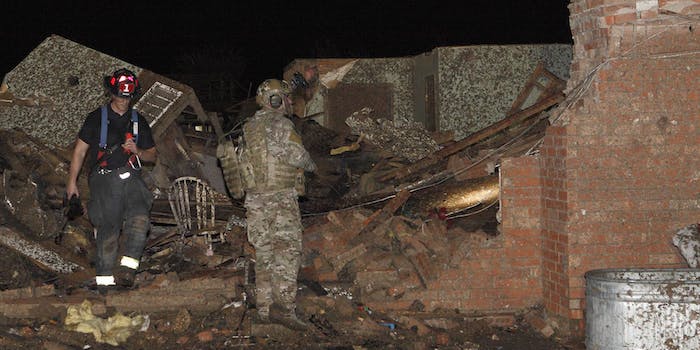 How Reddit stepped up to help Oklahoma tornado victims

Redditors have offered food, shelter, and help finding missing pets after the devastation in Moore, Okla.

Reddit is coming to the aid of those who have felt the effects of the devastating tornadoes in Oklahoma.

Since the deadly storms wreaked havoc on the Oklahoma City suburb of Moore on May 20, r/Oklahoma, the state’s subreddit, has been exploding with news. While many submissions include photos and videos of the natural disaster, many others include something more: help.

“I’m at tinker [air force base] and i have a few extra rooms if anyone needs any help at all. Please let us help you if you need it” redditor AgentJackBauer posted on May 20, offering his guest bed, food, and even a ride to any interested parties.

AgentJackBauer’s generous offer is just one example of how redditors are offering their assistance in the wake of the devastation. In separate threads, redditors sillyokio and aphoticnullity have also opened their homes to anyone needing shelter. Redditor route66 has announced his intentions to sell his car to help the tornado relief efforts. Still others, like like OuFilmguy89, are offering any degree of help that they can.

“Does anyone have information on how to offer volunteer assistance, in any capacity, tonight and in the days to come?” OuFilmguy89’s selfless post to r/oklahoma read, in part.

Summus started the subreddit r/MissingPetsInMoore, which is aimed to help reunite people with their lost pets in and around Moore, one of the communities that was hit hardest by the storms.

Assistance isn’t only coming from Oklahoma-centric subreddits, however.

The relatively new subreddit r/Live_News, started after Reddit’s response to the Boston Marathon bombings, has kept redditors updated on developments in Oklahoma. Within a single thread, r/Live_News subscribers are able to keep an eye on everything from weather conditions to evacuation orders.

The subreddit r/randomactsofpizza, which gained notoriety for its response to the Boston Marathon bombings, also lent its unique—and delicious—brand of assistance to patients and employees of medical centers and children’s hospitals in Oklahoma.

“I would also like to send a pizza to anyone from OK who is hungry, whether you were displaced by the storm, a volunteer, or just someone who got shaken up.,” redditor wishitwas commented in the thread.

Reddit may typically be seen as a gathering place for memes, political rhetoric, and movie spoilers. More and more, however, tragedies like the Oklahoma devastation, the Boston Marathon bombings, and Hurricane Sandy have proven that the community has a unique ability to immediately and continuously come together to help fellow redditors and non-redditors alike.