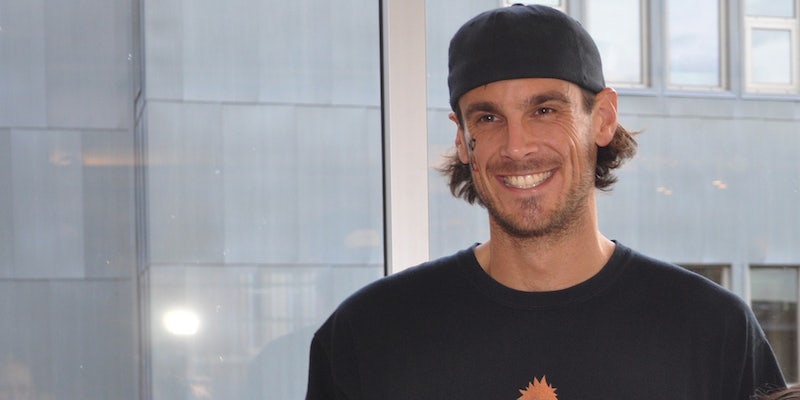 Why a former NFL player's tell-all isn't relevant to the NFL.

Chris Kluwe, outspoken Twitter icon and free-agent NFL punter, wrote a juicy tell-all in Deadspin about how he was released from the Minnesota Vikings. He says he was “fired by two cowards and a bigot,” including Vikings head coach Leslie Frazier. According to the team, Kluwe was booted for poor performance, but Kluwe counters that there were other factors leading up to his dismissal, including his work as an LGBT activist, which he claims was controversial among NFL management.

He writes that Vikings special-teams coordinator Mike Priefer “used homophobic language” over several months and berated Kluwe “in an incredibly harsh tone the likes of which I’ve never heard a coach use about my abilities as a punter.” He also, allegedly, said Kluwe would “end up burning in hell with the gays.”

There’s a lot of behind-the-scenes organizational corruption to discuss here, and it makes sense that the largest NFL community on Reddit would be clamoring to talk about it. But the forum’s moderators are removing submissions linking to Kluwe’s story.

NFL reddit can’t talk about Chris Kluwe because apparently it’s not relevant to the NFL https://t.co/mPu5FubaeO

“Why can’t we talk about Chris Kluwe?” one user wrote in a thread that hit No. 1 on r/NFL Thursday. “He had an interesting article come out today, he’s an NFL free agent, and we want to talk about it. Why are all of the posts being deleted?” Commenters primarily agreed. “The article had a lot of detail about stuff that goes on behind the scenes in the Vikings organization,” one wrote. “Shouldn’t have been removed.”

An r/NFL moderator, Naly_D, clarified to me that they are not censoring discussion about Kluwe himself, just blocking “political” submissions, which they’ve done consistently since last year. Of course, there’s some grey area with certain subjects, including Packers quarterback Aaron Rodgers refuting rumors that he’s gay.

Mods did not “specifically set out to remove any submission related to” Kluwe, he wrote. “Rather, we are sticking to our rules regarding political submissions—a rule the community requested last year, largely because of previous threads regarding Kluwe or on the Redskins name which could bring out the worst in some users.” He says a news story about Kluwe’s allegations would be allowed. But in this case, Kluwe “is openly speculating about motivations which are based on a personal grievance and as such cannot be proven or disproven.”

“We would remove any submission on a player speaking about their political beliefs,” he says, “whether it was gun control, Obamacare, school curriculum, gay rights, etc. This is irrespective of the player, their team, and whether they are a current or former player.”

The r/NFL forum disallows “tabloid/nonrelevant posts—anything not related to the actual NFL.” In this case, moderator Cisco apparently told a user that Kluwe is “out of the NFL now and the story is very one sided … a TMZ tabloid story just used to stir drama.”

The moderator also argues that Kluwe is no longer in the NFL. I checked Reddit’s NBA forum, r/NBA, to see if that subreddit took a similar tack with Jason Collins, the ex-player who wrote a Sports Illustrated tell-all announcing he was gay. Those discussions were among the most popular on r/NBA. Of course, this is a different subreddit with different leadership.

In response, Naly_D told me:

I think the distinction there is that it is a player directly addressing their own personal lives rather than Kluwe, who is openly speculating about motivations which are based on a personal grievance and as such cannot be proven or disproven.

If a player came out, we would allow that with strict moderation in the comments. Because we have people from all ethnicities, sexualities, religions, genders on r/NFL and they all deserve to feel welcomed. For that reason we have similar rules in place for religious discussion.

But an article like this is not within those lines—it is similar to when people were saying Cam Newton and Michael Vick were being subjected to institutionalised racism. There is no basis for it, it is speculation, and it will only serve to cause friction within the community.

R/NFL is just one subreddit out of thousands, and its moderation does not represent Reddit as a whole. But it’s far from the first time moderators have tried to shape conversation by blocking specific stories, news sources, or entire media networks, only to find their decision shunned by the communities they serve.

Why Reddit should never be taken seriously: mods have overarching power to do dumb things, like ban all Kluwe talk https://t.co/wbveQb0g2k

In the fall, r/politics moderators announced a ban on stories from left-leaning news site Mother Jones, which leaked Mitt Romney’s “47 percent” speech in 2012. On Reddit and Twitter, the decision was met with massive backlash; many users and journalists cried censorship, accusing the mods of abusing their power. Moderators eventually relented, although similar sites such as Salon.com—and many more—are still blocked.

Many subreddits also continue to enforce a year-old blanket ban on the Gawker Media network. The widespread block began in late 2012 when writer Adrian Chen published an exposé of Reddit moderator Violentacrez, known for leading NSFW subreddits that collected sexualized images of underage girls. Deadspin, a Gawker property, is allowed on r/NFL. “We decided not to include ourselves in those shenanigans,” Naly_D wrote to me. But “we do ban mindless or satirical links,” wrote a different mod last year, “posts that don’t inform or pose substantive questions about the NFL.”

Update: Another r/NFL moderator, sosuhme, says they’ll be reviewing the front-page thread about their decision to squelch these submissions. “We won’t ignore the feedback we get in that thread, and will adjust our guidelines accordingly after we’ve had a chance to talk about it with users once cooler heads prevail.”

Subreddit moderation isn’t a cut-and-dry process. With each breaking-news item, mods are making split-second decisions about what to allow and what not to—and they have their communities in mind, first and foremost. “Our rules are constantly in a state of flux and we are all aware and grateful we act on behalf of the community, not of our own accord,” says Naly_D, the other moderator. “We run over our rules and possible changes at the start and end of every offseason, and always take feedback from threads like this on board.”