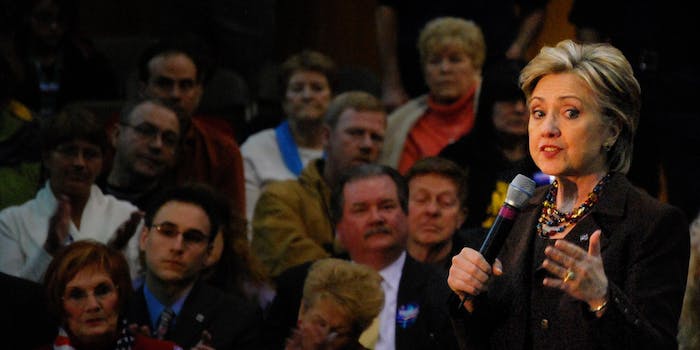 3 reasons I’m not #ReadyForHillary just yet

As a democrat, Hillary Clinton will need to address some key issues to win me over.

As a progressive millennial who actively volunteered for and supported Barack Obama in the 2008 Democratic presidential primaries, I am ready to make public an opinion I’ve only expressed in private until now:

This statement isn’t intended as a slight against Obama (who I actually ranked pretty highly in the presidential pantheon just last week), and it must seem like a bizarre way to open an article about Clinton’s shortcomings as a potential presidential candidate. That said, even if one thinks she’d be a strong presidential candidate in 2016, the three main concerns that caused me to vote for Obama instead of her—namely, that she represents the political and economic establishment, supports hawkish foreign policies, and would risk creating a dynastic trend in the American presidency—are still relevant today.

Are we #ReadyForHillary, as those who advocate on her behalf suggest? Maybe, but there are three big reasons to exercise caution.

This concept may seem strange to Tea Partiers, who want to think all liberals are exactly the same (i.e., socialists), but there are many factions within the liberal movement. One of them, the Third Way or DLC faction (short for the Democratic Leadership Council), is known for adhering to a centrist economic policy and hawkish ideology, at least in part due to its close alliance with big business interests.

Not only was Bill Clinton their first president, but he captured the Democratic presidential nomination in 1992 due largely to their backing (after three unsuccessful White House bids in a row, a candidate who accommodated Reagan era conservatism seemed necessary).

We can start with how this has impacted her foreign policy views. Back in 2008, her votes in the Senate for the Patriot Act and Iraq War Resolution condemned her in the eyes of foreign policy progressives. As a recent article in The Nation illustrated, this hawkishness didn’t change when she was Secretary of State. “Both before her appointment and during her service, she consistently came down on the hawkish side of debates inside the administration, from Afghanistan to Libya and Syria,” wrote Bob and Barbara Dreyfuss. “She’s also taken a more hawkish line than Obama on Ukraine and the confrontation with Russia.”

While the hollowness of the Republican claims about Benghazi may very well be a “scam,” as Joe Klein aptly put it in a Time magazine article last year, Clinton’s militarism on foreign policy issues is not.

2) She is too close to Wall Street.

As Elias Isquith of Salon correctly wrote earlier this week, being viewed as the frontrunner “locks its victims into the mold of representing the establishment,” which in its own right could work to Clinton’s disadvantage in 2016.

That said, the notion that Clinton is too cozy with party and business leaders has some merit. “The big bankers love Clinton, and by and large they badly want her to be president,” reported Willard D. Cohan of Politico, “Many of the rich and powerful in the financial industry—among them, Goldman Sachs CEO Lloyd Blankfein, Morgan Stanley CEO James Gorman, Tom Nides, a powerful vice chairman at Morgan Stanley, and the heads of JPMorganChase and Bank of America—consider Clinton a pragmatic problem-solver not prone to populist rhetoric.”

Unfortunately for Hillary, the political conditions which spawned the DLC takeover no longer exist.  “It’s tough to be a ‘Third Way’ corporatist in today’s Democratic Party,” said Markos Moulistas, founder of the Daily Kos and among Clinton’s leading progressive critics. He further explained that “all the hedge-fund money in the world can’t change the fact that the party is in the midst of a dramatic reorientation toward a new progressive populism.”

Indeed, this progressive populism provided Obama with the edge he needed over Clinton in the 2008 primaries and, despite a flagging economy, helped him use Mitt Romney’s Wall Street background against him to win reelection in 2012. That’s why, when Sen. Bernie Sanders (a prospective 2016 candidate himself) was asked about her qualifications for the presidency in an interview with Salon, he inevitably replied that “based on the kind of centrist positions that we have seen her take in the past” there was concern “whether she will be a forceful advocate for working families.”

3) It would create an unprecedented dynasty.

All of this is exacerbated by the potential danger in creating a dynastic presidency. Back when I had to choose between Clinton and Obama in 2008 (a contest in which, it must be remembered, she was considered the heavy favorite), I remember thinking it would be bizarre for the litany of presidents to include a list that went “Bush-Clinton-Bush-Clinton.”

Eight years later, the prospect of having it read “Bush-Clinton-Bush-Obama-Clinton” seems only marginally better, especially since Jeb Bush is also said to be considering a run that year, meaning the 2016 election could very well be a match between the wife and son of the 1992 major party candidates (as well as end in “Bush-Clinton-Bush-Obama-Bush”).

Considering that, before the 21st century, there had only been two pairs of immediate family members to reach the presidency (father-son John Adams and John Q. Adams and grandfather-grandson William H. Harrison and Benjamin Harrison; Theodore and Franklin Roosevelt were fifth cousins), it would be unsettling to have two nuclear families control the White House for all but eight years out of thirty-six.

Making matters worse is the fact that the Bushes and Clintons have become very close recently, with George W. Bush referring to Bill Clinton as “my brother from another mother,” talking about how George H. W. Bush is a father figure to him, and waxing fondly about exchanging advice on becoming grandparents. While all of this may be endearing from a strictly human perspective, it does little to remove the pall of incestuousness from these proceedings.

The answer to the first question is actually pretty easy: Obama was nominated at a time when the Iraq War electrified American politics, but after the stock market crash in September 2008, the focus quickly shifted back toward economics. Given her husband’s impressive economic stewardship in the 1990s, I’ve always believed that Hillary could have been elected over John McCain by an even larger margin than the one that carried Obama to victory (the rest would have been done by the unpopularity of the Republican brand during the last years of Bush’s presidency).

More importantly, I felt that the vast network of connections Clinton had established during her sixteen years as a top presidential adviser and United States Senator, would have enabled her to pass sweeping economic and social legislation to match the prodigious output of the last great Democratic leader on domestic issues, Lyndon Johnson (who, like Clinton, was also distrusted as a tool for moneyed interests before he actually became president).

While I still argue that Obama achieved quite a bit during this time, the Clinton family’s association with prosperity and political connections could have given her the tools to do even more. Had the economic crash occurred only six months earlier, Clinton may have very well gotten my vote.

Of course, the fact remains that we aren’t living in late 2008 anymore. On the one hand, Clinton has major advantages as the next election approaches, from her commanding lead in early polls and extensive experience to the powerful hashtag feminist base she can tap for grassroots support. That said, she has yet to dispel the same reservations that stopped me from supporting her in the last set primaries. Because I voted against her once and have since come to believe that was a mistake, I’m willing to keep an open mind. My sense is that I speak for other progressives when I say that—and, likewise, when I point out that she still needs to win me over.