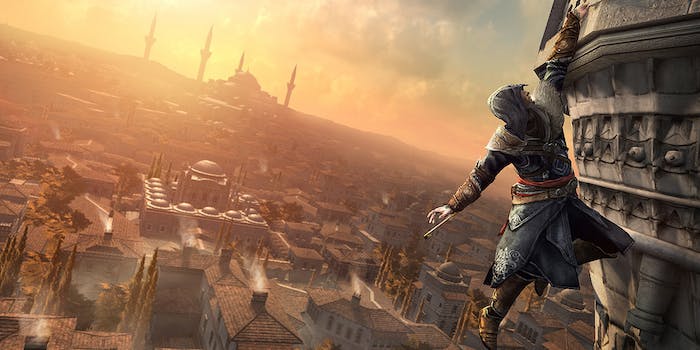 Ubisoft Montreal’s choice is a symptom, not a cause.

When James Therien, technical director of Assassin’s Creed Unity, was asked at E3 2014 by video game enthusiast press site Videogamer.com whether there would be any female playable characters in the game, he said:

It was on our feature list until not too long ago, but it’s a question of focus and production. So we wanted to make sure we had the best experience for the character. A female character means that you have to redo a lot of animation, a lot of costumes [inaudible]. It would have doubled the work on those things. And I mean it’s something the team really wanted, but we had to make a decision… It’s unfortunate, but it’s a reality of game development.

As soon as Videogamer.com called Therien’s response an “excuse” rather than an “explanation,” it set the conversation—one that would corkscrew straight into the ground.

Nothing of what I have to say here is an apologia for Ubisoft Montreal. Nor am I invalidating anyone’s anger over the company’s decision not to include female playable characters in Assassin’s Creed Unity.

I do think it’s problematic that no one took a step back and asked whether Therien’s explanation made sense—from a development perspective. I think it’s counterproductive to assume Ubisoft Montreal just didn’t care about having female avatars in their game, the implication being that they’re just a bunch of thoughtless sexists.

I suspect no one wanted to consider the question with some intellectual honesty because we know, consciously or otherwise, that Ubisoft Montreal’s decision might have made all the sense in the world. And that’s precisely why Therien’s answer pissed everyone off. The fact that it might make sense is the problem none of us knows what to do anything about.

The common responses to Therien’s statement, on the other hand, made no sense at all. Critics pointed at the fact that nine studios are working on Assassin’s Creed Unity—which, of course, means the resources were available to add female playable characters to the game, right?

According to the developers I’ve been speaking with about this incident since E3, having nine studios working on a game could actually make it more difficult to add any sort of content into a game. The more studios that are working on a game simultaneously, the more of a clusterfuck development can become.

Another common response to Therien’s statement was the size of the budgets on triple-A games. Just for sake of discussion, let’s say the budget for Unity was $100 million. Having that much money at their disposal means Ubisoft Montreal had all the money they needed to develop female playable characters for Assassin’s Creed Unity, right?

How much does $100 million buy? I’ve been covering the video game industry professionally for four years, with an eye toward writing for developer audiences whenever the opportunity arose, and I don’t know much video game $100 million buys. I do know the question is nonsensical. How far you can stretch a dollar in video game production depends on the platform, the genre, and other details about the specific project in question.

Then we get to the comment made on Twitter by video game animator Jonathan Cooper, who said it would take “a day or two’s work” to animate a female playable character in the game. I don’t see how, considering the context in which Cooper made his remark, we aren’t meant to take it as anything other than Cooper implying that it would be easy for Ubisoft Montreal to do this work.

Regardless of whether that’s what Cooper meant, that’s precisely how his comment was taken by a great many critics. The idea quickly evolved into a snarky hashtag that contributed nothing of value to the real discussion at hand.

When I heard Cooper’s comments, they didn’t sound right to me, so I reached out to some triple-A game developers to get a grasp on what it would actually take to add a female playable character into the co-op mode for Assassin’s Creed Unity. Here’s what a source told me, on condition of anonymity.

At our studio, a good animator can do say 8 basic animations (say, a reaction to being hit) in about 2 days. Let’s give Mr. Cooper some leeway here and allow him to be 10 times as fast as our team. That means 80 animations in 2 days. We have no way of knowing whether that will be sufficient, but let’s say it would be to do a female assassin.

Does this assassin have to be conceptualized, modeled and textured? Yes.

Does VO have to be written, cast, recorded and localized for the assassin? Yes.

Do engineers, designers and artists have to work together to figure out where to cut memory from the existing assets to make up for the memory delta added by the new assassin? Yes.

Does the entire experience have to be put through QA again to make sure that there are no new memory problems, animation problems, texture problems, VO problems, subtitle problems, etc. from the new assets? Yes.

Does a new interface element have to be added or an existing one modified to account for the player being able to select this new character? Yes.

Will any new elements added to the memory footprint by definition necessitate the removal of existing elements, reduction of the quality or the re-optimization of same to stay under your memory limits? Yes.

The question of memory limits is a huge one for game developers. It came up recently for a story I wrote about Wolfenstein: The New Order in which I questioned why the characters in the Camp Belica scene lacked the variety I expected to see. I spoke with Wolfenstein Creative Director Jens Mattheis, who argued that every game has its limits, an explanation I found to be entirely reasonable, such that I withdrew my criticism.

It’s a problem of production. This game is extremely huge, so you don’t always have the production resources to do everything exactly as you want. … As a developer, you want every component of your game to be perfect, and you do whatever you can. If you’re a good developer, you will go to any lengths to get as close to that as possible. There are production realities, and you have to get to the point where that conveys what I want to convey, even though it might not be 100 percent there.

Let’s approach the question another way, vamping off something journalist Leigh Alexander said during an NPR interview: “What [Ubisoft Montreal’s] response reveals is that they didn’t scope for [female playable characters], that from the beginning it wasn’t a concern.”

The question Alexander suggests is fair. Why weren’t female playable characters part of the plan from the very beginning?

First, I think we need to reframe this a bit. “Playable characters” doesn’t sound right to me, either. We’re not talking about characters. We’re talking about avatars. In the story mode for Mass Effect 3, Commander Shepard and her cohorts were characters.

There are no narratives, no back stories, and no character development in the four-player co-op mode in Mass Effect 3, however. Players control avatars and fight the bad guys. That sounds like an appropriate comparison for what we’ve seen so far of Assassin’s Creed Unity’s co-op mode.

So let’s consider another statement I was given by a triple-A game developer on condition of anonymity: “In almost all console game development, memory optimization is critical, as you really want to use up every available drop of memory to get the best visuals, gameplay, etc.”

I am made to understand that if Ubisoft Montreal wanted to create a female avatar in the co-op mode for Assassin’s Creed Unity, that means all of the associated data for that avatar needs to be stored in memory even if no one is using the character. Now reflect on the fact that only 18 percent of the player base for Mass Effect 3 chose to play as a female Commander Shepard.

Can developers always afford to leave a bunch of memory free and unused in order to account for optional content that many players may never use? Not according to what I’ve been told by game developers since I started asking them about all this. Not when they have base content that has to run smoothly without crashing, and that is already pushing the limits of what the memory can handle.

It’s easy for me, as a man, to coldly break this down into technical conversations. If you look at my track record, you’ll see that social justice concerns are nothing I take lightly, however. And I debated, out of concern that someone might disingenuously try to turn it around as an argument for why we ought not to question Ubisoft Montreal’s decision, whether to write this piece at all.

When we assume bad faith on the part of game developers in regards to social justice issues and reflexively go on the attack, we cut conversation off at the knees. And some within the social justice community argue that the best way to bring about positive change is to meet the people you are trying to educate where they are, not where you expect them to be.

I don’t think the developers at Ubisoft Montreal are a bunch of thoughtless sexists. Their decision not to include female avatars in Assassin’s Creed Unity was a business decision that makes sense for a business that operates within an institutionally sexist culture. That’s not just the culture of game development, but the culture we all live in.

Ubisoft Montreal’s choice is a symptom, not a cause. And I’m concerned that shutting down conversation with the company does nothing to promote it taking a cold, hard look at why it made the decision it made, and the context in which Ubisoft made it.

Photo via SobControllers/Flickr (CC BY 2.0)