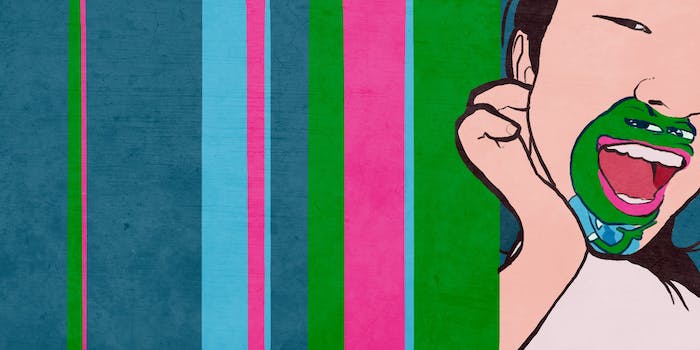 Girl magically turns her mouth into the rarest Pepe ever

We have possibly found the rarest Pepe of all.

Imgur has been freaking out over a girl who has whipped up the meme with the power of makeup. While we’ve seen iterations of people covering themselves with green paint to become a full-fledged Pepe, which typically has horrifying results, this situation is different. Instead, this young woman is fused with the internet frog. They share one fleshy vessel and, more importantly, one set of teeth.

When she smiles, Pepe smiles. When she frowns, Pepe frowns. When she eats, Pepe eats. Woman and meme living in perfect harmony. A womeme.

Posted to Imgur on Wednesday, the feat of artistry has already racked up over 10,000 points. There’s not much information known about who the mystery womeme is other than a major Pepe fan. We do know, however, that she captured this video using the Chinese beauty and image editing app faceu. But we’re hoping her glow just comes from the compelling joy of Pepe.

Imgurians have had mixed feelings about the mouth meme. The top commenter writes, “Every day we stray further from God’s light.” A similarly minded individual agrees that we are falling “into the dank abyss.” Others seem to be supportive of Pepe’s continual domination.

Meanwhile, of course, came lots of inappropriate sexual jokes because this is the internet we’re talking about. We, on the other hand, will be eagerly awaiting the makeup tutorial.