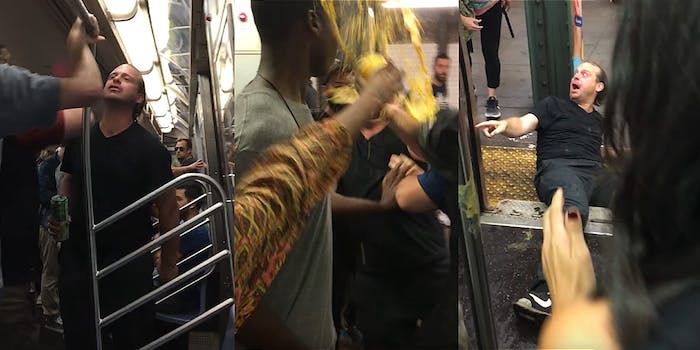 Both were on display on a New York City subway this weekend, where a man was filmed sucking down a Lime-a-Rita while chanting “n****r.”

The video comes via Gothamist and shows a visibly intoxicated white man on the L train repeatedly screaming the slur while passengers attempt to silence him.

“I talk shit because I know I can, because I’m a lawyer. I went to NYU law. Fuck you!” the man shouts at the start of the video, which begins after the incident is already underway.

Passengers surround him and, as the train comes to the station, attempt to force him out of the car. He fights back, and tries to reclaim a bag of his he says is still on the train, but at the 1:48 mark, he gets served a cup of justice.

A cup of Au Bon Pain soup justice. To the face.

Gothamist spoke to a passenger who described the experience, saying it began over a dispute about personal space.

“Understandably, this woman of color and a couple other folks as you can see in the video, call the guy out. This guy starts caterwauling about his First Amendment rights and whatnot. The guy didn’t seem to be falling-down drunk but was … clearly belligerent.”

Afterward, the passengers embraced, according to the person who tipped off Gothamist to the video.

“After Bedford [the station he was forced out at], the woman [who first called him out] kind of broke down. She and the larger gentlemen in black embraced and there was a good sense that social justice had been served.”

According to Gothamist, although police were present at the station, there was no record of the man being arrested after being forced off the train.