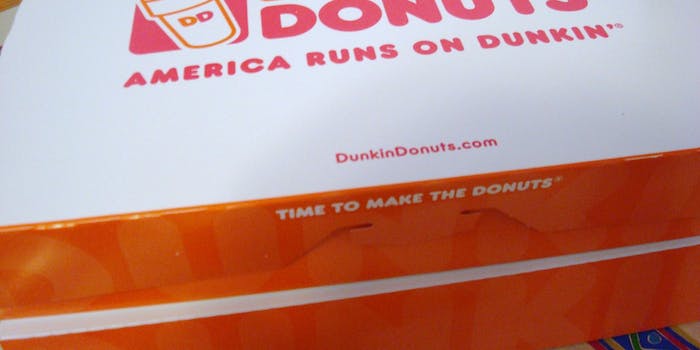 Of all the strange things to be found in Taylor Chapman’s eight-minute viral video rant—the racist invectives she spewed at teenaged donut-shop employees, her intent to feed tainted food to her boyfriend, even her repeated threats to emigrate to Mars and then nuke everyone back on Earth—perhaps the strangest thing is this: When Chapman posted this surreal rage-fest to her now-defunct Facebook page, she clearly expected the Internet to sympathize with her.

This did not happen. Instead, the Smoking Gun introduced her to the world as “the horrible Florida woman who filmed herself berating Dunkin’ Donuts workers,” New York’s Daily News called her an “iPhone-toting crackpot,” and the British humor site Anorak cheekily suggested Chapman is actually a pioneer of American legal jurisprudence:

RIGHT now a U.S. donuts Rights lawyer is drawing up litigation to sue the arse off Dunkin’ Donuts for breach of glaze. The woman making this video of herself insulting employees of a Florida Dunkin’ Donuts store might look like a lazy, thick, bigoted, pathetic, delusional, self-important arsehat. But in reality she’s just pushing the envelope of the US legal profession.

It all started the night before Chapman made her video, when she and some friends visited Dunkin’ Donuts and either did not get a receipt or didn’t get one quickly enough. (There’s some dispute over exactly what happened.)

The next day, Chapman returned to the store, hit “record” on her smartphone, and spoke to the young man working behind the counter. (The Smoking Gun later identified him as 18-year-old Abid Abar, a recent high school graduate who is working at the donut shop this summer before starting college in the fall.)

It’s a long video. Here are the choice quotes:

OK, this is all being under video surveillance, by the way. Um, I was here last night, and Nithi forgot to give me a receipt, OK? And then she turned into a complete rude bitch, I don’t know if you have any type of security cameras here, but you need to pull them up and listen to how she treated me, first of all, ’cause this is gonna get posted on Facebook. I already posted on Facebook what you guys did. I have NEVER had a problem with day shift. You have always given me exactly what I’ve asked for, and respected me with kindness, the utmost, and I thank you for that. This girl was so f**king rude to me, and said okay, well you can get your order free next time, so you know what I told her? I said I want the whole f**king menu, bitch. Twice. Gimme your manager’s number, the owner, now, cause I guarantee, I said guarantee, and I have already called my lawyer and he is already on it. So when it says you don’t get a receipt you get your order free, it f**king means it, right? Or is it a lie? ’Cause this is all being recorded. … I should get my order free.

Abar agrees to give Chapman whatever she’d ordered the previous day, for free. Chapman requests a strawberry Coolatta, and when he asks her if she had ordered one the day before, she snaps, “No. … It was, like, a bunch of us in the car yesterday, if you want me to get exactly what I got yesterday it’s gonna be a s**t-ton more.”

Chapman goes on: “I can’t wait to post this on Facebook as soon as we’re done.” She aims her camera at herself, waves, and says, “Hi, Facebook! This is what you have to do in, in life. It f**king sucks. Blow my brains out. I cannot wait to post this.”

The night shift lady last night stepped over the line …. She was a complete c**t sand n***er whore. And, like, I’m going to Mars, I’m about to nuke this place out, I’ve already posted that on Facebook too, and there are applicants for Mars and I’m about to take off and watch this Dunkin Donuts explode [unintelligible] bitch fighting over bulls**t. And I’m posting that on Facebook too. How do you feel about that?

By the video’s 5:20 mark, Chapman is still explaining her righteous cause:

She shouldn’t have pissed me off like that. I just wanted my order, I just want my, like, my bacon crispy, and then I want my people to be nice. And when you say it on the wall if you don’t get a receipt your order is free then it should be free right there, you know what I mean? … I’m from Indiana and Kentucky and up there this sh*t doesn’t happen, so, I don’t know if it’s a miscommunication or what, but, I’m going to Mars where I don’t have to deal with it. It’s a one-way flight.

Then Chapman changes the subject:

Even if they hock a loogie and s**t in it and I don’t even care, ’cause one time they pissed in my fries when I’m coming home, literally I could smell the piss in it, so I know they have probably spit and shit and doing everything in it cause they really really don’t give a f**k, they really don’t, that’s why I’m not eating this food and I’m giving it to my boy—my boyfriend, because I can’t trust them anymore.

Chapman’s narration starts again at 7:05 when she catches sight of Nithi, the previous night’s employee:

Guess what? This sh*t’s about to go LIIIIVE, bitch! Right on Facebook! ’Cause I already posted what your dumb ass did last night, so I hope you’re happy. With your little f**king sand-n***er self. Cause I’m about to nuke your whole f**king planet from Mars. Think y’all are tough, big bad Arabs bombing this—the Trade Center? I’ll show you tough.

“I’m not done,” Chapman snaps at him. “You didn’t give me my water, and you didn’t give me my f*cking Coolatta.” After more complaints about the service, Chapman gloats, “This is all gonna be on the Internet, YouTube, I hope this gets a million f**king hits. … Right now everyone on Facebook sees you, Nithi! Turn around and say hi!”

The video ends there. The good news is, Chapman got her wish; if the multiple copies of her YouTube rant haven’t amassed a million hits between them yet, they will soon.

Before becoming famous this week, Chapman appeared in low-rent videos advertising various south Florida businesses, including Happy Wok Chinese Food. But if recent YouTube comments on the Happy Wok video are any indication, Chapman needs to find another line of work; it’s unlikely any businesses will want her as their public face now. As commenter Amarks333 noted: “Hey Happy Wok Chinese Food, nothing against you or your business, but? you need to get this video off your website and not associate yourself with this woman anymore because she will destroy your company.”

And that’s before she nukes the planet from orbit, too.