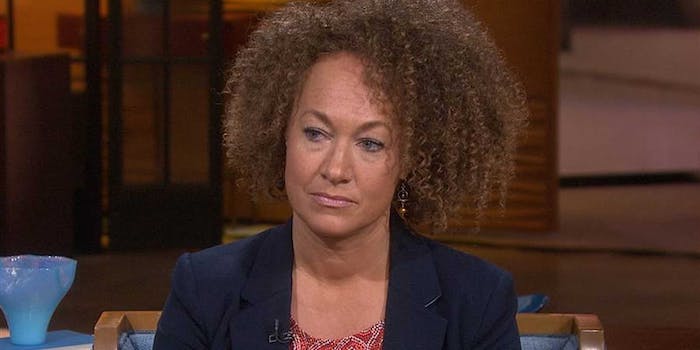 9 ridiculous things everyone needs to stop saying about Rachel Dolezal

Don't give her a pass.

White privilege seems to find a way to protect itself, at any cost.

Now that former NAACP leader Rachel Dolezal continues facing scrutiny for lying about her racial identity, many have rushed to defend her actions. Whether it comes from a place of feeling sorry for Dolezal or simply a lack of understanding of how race in America functions is anyone’s guess.

Regardless of intent, however, these defenses excuse away how Dolezal’s white privilege allowed her to appropriate black womanhood for so long and presume that she shouldn’t be held accountable for her behavior.

Instead of dodging Dolezal’s whiteness as a factor in this situation, her white privilege needs to be directly confronted—especially as many white people try to make sense of their own racial identity in the midst of Dolezal’s confusion and lies. But the dialogue often falls into one of these potential traps.

1) There’s no such thing as race, there’s just the human race

"There's only one race – THE HUMAN RACE. Except when I want someone to blame for crime rates and stuff. Then there are different races."

It’s true that race is a social construct, but it’s a construct that’s long informed how black people and other non-black people of color have been treated in American social settings and institutions. The effects of slavery, segregation, and the many racialized policies and social norms they inspired are still an everyday reality for black people—a reality that cannot be ignored, and one Dolezal grew up never having to experience.

Yet Rachel Dolezal told NBC’s Matt Lauer that her adopted son said, “Mom, racially, you’re human. Culturally, you’re black,” and that’s how she understands herself. That may be nice in theory, but it’s not how the real world operates.

Please stop dragging mental illness into Rachel Dolezal debate. Those of us with real mental illnesses deserve better than that comparison.

She might be a bit of a compulsive liar, but that’s not a documented mental health condition as much as it is a poor testament to Dolezal’s character. Comparing her case to a mental illness fuels the stigma faced by people who experience a mental health condition or disability, furthering the stereotype that they’re inherently untrustworthy and should be feared rather than understood.

That’s not to say one can’t feel sorry for Dolezal’s visible struggle with racial identity, but it’s important to remember that much of her story so far has been based on falsehoods.

Race and culture are often interrelated, but they’re two distinguishable concepts. There’s no one, singular experience for being a person of any racial background, although there may be some common experiences for people within a given racial group. For instance, quite a few black women might share experiences of using hair perm to chemically straighten their hair, if they so choose. But on the flip side, Thanksgiving dinner won’t look the same at every black household.

In Dolezal’s case, she’s not saying she has a strong appreciation for black culture or feels that she participates mostly in black cultural spaces and practices. In an interview with the Today Show’s Matt Lauer, she said, “I identify as black.” That’s a horse of a different—and very problematic—color.

4) She’s helped the black community, so stop giving her a hard time

"She's doing good for our commun.." She could wash the spray tan off right now and go back to being a white woman in America. You can't.

Dolezal has been teaching African-American studies, volunteering time for civil rights causes and forming curriculums on human rights inclusion issues for years—that’s true. In an op-ed for Time, former basketball player Kareem Abdul-Jabbar came out to defend her on that basis, arguing that the “black community is better off because of her efforts.”

You can’t deny that Dolezal has proven herself a fierce and unrelenting champion for African-Americans politically and culturally. … [S]he has been fighting the fight for several years and seemingly doing a first-rate job. Not only has she led her local chapter of the NAACP, she teaches classes related to African-American culture at Eastern Washington University and is chairwoman of a police oversight committee monitoring fairness in police activities.

But that doesn’t excuse away her appropriation of blackness, of black womanhood, and her lying to people (especially black folks) about her racial background. There’s a reason that Eastern Washington University has recently taken down her bio from their site: No matter how great the work she did was, every organization she was a part of was harmed because of her dishonesty.

5) But if Caitlyn Jenner can self-identify as a transgender woman, Rachel Dolezal can identify as a “transracial” woman

Gender identity and race are both two distinct phenomena, which intersect differently depending on the person. While gender is about what’s between your ears, not your legs, race isn’t just your own concept of self but how others treat you based on appearance and its cultural connotation. How race is understood in America places people in categories based on their ancestry. In that sense, race isn’t so much about how an individual identifies as much as it’s about their background.

That’s part of why it’s not the best idea to conflate transgender identity with how Dolezal (and others) misconstrue the notion of being “transracial,” a term that only relates to adoptions between families of differing racial backgrounds and not an individual self-determining which race they’ll identify as.

If someone is multiracial, they may identify that way—or they might be more strongly aligned with a certain part of their lineage based on their upbringing and life’s experiences. However, that’s not the same as Dolezal’s situation.

6) Everyone knows a black person who looks like Rachel Dolezal

Not necessarily, but it is true that black people in America come in various shades. For black people who are on the lighter end of the spectrum, based on their skin color, hair, and other physical characteristics, it might be easier for them to pass as a white person. However, in Dolezal’s case, she changed her hairstyle and allegedly alters her skin tone so that she can pass for being a lighter-skinned black woman.

Just because Dolezal could pass doesn’t give her an out from appropriating black womanhood.

7) It is possible for someone to achieve blackness, even if they have white birth parents

As people of color no matter how hard we try we cannot achieve whiteness, but the fact that a white women can achieve Blackness and lie and

No matter how hard a white or non-black person works—whether it be in a classroom, in an advocacy campaign, in a community, or by way of educating themselves—they won’t become black by some arbitrary measure. People who aren’t black can get degrees in African-American studies, as Dolezal did, but that piece of paper doesn’t get them approved for a so-called black card.

For example, although some white musicians have been embraced within traditionally black genres, such as Teena Marie and Eminem, they’re still seen and understood as white people. A white artist’s ability to authentically connect with black audiences through their music doesn’t make them black by proxy.

8) Who doesn’t want the coolness of being black?

The physical characteristics and cultural practices of black people aren’t costumes that someone can just put on and take off whenever they please. Although people who aren’t black can indeed have an appreciation for black culture and black people, it crosses the line into appropriation and disrespect when non-black people recklessly borrow black culture without giving proper credit. It’s even worse when black culture gets stolen by non-black people (including Rachel Dolezal) who claim it for themselves, despite having no ancestry or relatively limited connection to black communities.

Blackness can’t be reduced to an accessory or a prop. If that were the case, then all of the social and institutional indignities black people endure on a daily basis, including racial profiling and police brutality, would be a costume change away from not happening. But when white people appropriate blackness, they can enjoy the fruits of black labor and creativity without experiencing the same struggles with racism.

9) If she wants to be black, she can be black

Sorry, Whoopi Goldberg and Raven-Symoné, but that’s just not how this works. On The View, Whoopi Goldberg defended Rachel Dolezal by saying, “She definitely owned it. She’s passing as this woman for over five years. If this b***h don’t know by now what’s it’s like, she’s never going to know.” Co-panelist Raven-Symoné agreed: “Black women straighten their hair every day. Black woman do it all the time… White women can’t do the same thing?”

Unfortunately, that’s just not the way race works. Someone can’t choose to be black anymore than someone can choose to be white. Dolezal’s birth certificate shows she was born to two white parents. She’s a white woman, one who was raised as such—and who can’t escape the realities of race any more than Michael Brown or Walter Scott.

Instead of giving her a pass, we need to stop excusing her privilege and learn to confront it.