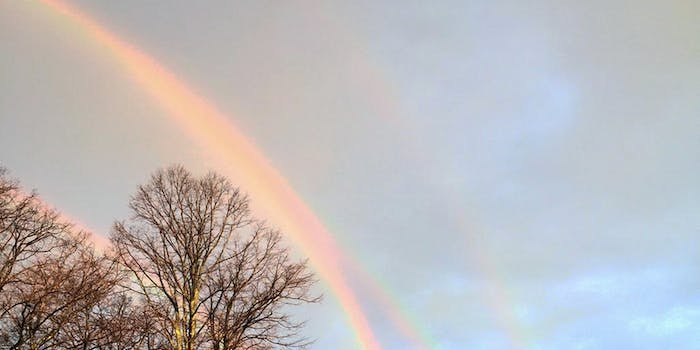 Everyone’s freaking out about this photo of a quadruple rainbow

Is it a coincidence that the photo went viral right after 4/20?

Were you moved by the stirring exhortations of the Double Rainbow Guy back in 2010? Of course you were—you have two eyes and a heart. But it’s 2015 now and the times have changed. Double rainbows are out. Quadruple rainbows are in.

This is the quadruple rainbow as shared by Long Island resident Amanda Curtis, who spotted the meteorological phenomenon during her morning commute. Quadruple rainbows are immensely rare; the first one was only photographed in 2011.

Others in the tristate area also tweeted their quadruple-rainbow photos, but none could quite compare to Curtis’s snapshot of the elusive QR.

Rainbow right outside our window in LIC… pic.twitter.com/Jkn0I2Ravl

If this is the first sign of the apocalypse, we’re not even mad. Look at that thing!