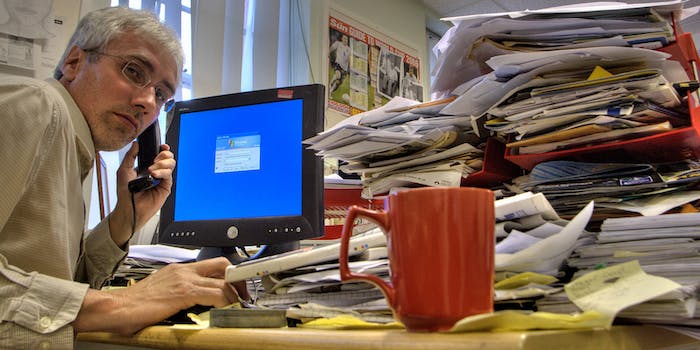 The good, the bad, and the ugly of being a workaholic

You might as well face it. You're addicted to work.

I am a workaholic. And if you think that statement is anything to be proud of, you might be one, too.

For a very long time, I secretly aspired to workaholism. If you threw a penny at me six years ago, I probably would have been struck while sitting alone in a basement apartment in Montclair, NJ, doing nothing but watching TV and reflecting on my screw-ups to pass the time. The Great Recession was at its worst, my personal depression wasn’t doing much better, and I was almost four years out of college without any meaningful work experiences to show for it.

Eventually I decided to change that. Within three years I had created a blog for writing political articles, written a couple of plays (one of which was performed at an Off Broadway venue, the Lark Theatre), and completed my MA in American history at Rutgers University–Newark. Three years after that and I find myself with an increasingly successful career as a freelance political columnist on the Internet, a nearly-completed PhD program at Lehigh University, and a local elected office within the Democratic Party. Whereas January 2009 found me stuck in a slump, January 2015 finds me with so much on my plate that I’m regularly scooping the metaphorical mashed potatoes off the tablecloth.

There are upsides and downsides to this.

The major advantages of workaholism are obvious and, to be fair, not inconsiderable. Foremost among them is the fact that I’m busy every day doing things that I love, which provides me with an immense sense of personal gratification.

The major advantages are obvious and, to be fair, not inconsiderable. Foremost among them is the fact that I’m busy every day doing things that I love, which provides me with an immense sense of personal gratification. It reminds me of an observation by Mark Twain:

Who was it who said, ‘Blessed is the man who has found his work?’ Whoever it was he had the right idea in his mind. Mark you, he says his work–not somebody else’s work. The work that is really a man’s own work is play and not work at all. Cursed is the man who has found some other man’s work and cannot lose it. When we talk about the great workers of the world we really mean the great players of the world. The fellows who groan and sweat under the weary load of toil that they bear never can hope to do anything great. How can they when their souls are in a ferment of revolt against the employment of their hands and brains? The product of slavery, intellectual or physical, can never be great.

By waking up every morning and knowing that I’ll spend my day doing what I love (and being paid to do it sometimes), I have an enormous blessing. Not only would I refuse to trade this for anything, I’m doing all I can to double-down on my workload and fill my life even more with these professional academic, literary, and political activities.

Recently I started keeping a sleep journal and noticed that I average five to six hours each night. At times that I’ve scheduled for relaxation, I frequently find my mind wandering to my work, and far more often than not, it does so in a way that stirs up anxiety. Over time the state of constant agitation has grown so bad that I’ve needed to seek medical help, with several doctors listing my stress levels as a serious health concern. Even my editors and collaborators have noted that I seem to always be “on.”

Aside from the toll taken on my physical and mental health, my workaholism also diminishes my ability to enjoy life’s simple pleasures. So much of what makes our day-to-day existence enjoyable can’t be achieved with a schedule and a willful exertion of strenuous activity. You can’t force yourself to have fun during a night on the town, relax with friends over a couple beers, really invest yourself into the plot of a movie you’re seeing in theaters, or get lost in music that crashes over you in waves at a rock concert. These things require an inner equanimity that eludes the grasp of the workaholic.

It was an equanimity that I possessed in spades six years ago. I could (and did) do all of those things back then, and I suspect that on some level I was happier for it.

This doesn’t mean that I believe everyone should live as I did at that time. Indeed, I have several friends who have refused to move on from that lifestyle and are gradually becoming bitter, jealous husks of their former selves as a result. Nevertheless, I’ve also seen that being a workaholic leads to problems of its own. Instead of being a shell, you become a nub, worn out from overstimulation and overuse.

The only path that truly offers no reward is that of the slave (to use Twain’s earlier definition). While a slacker doesn’t work at all and a workaholic is at least engaged in activities that feel right in his heart, a slave is forced to work in employment for which he or she is simply not well-suited. We live in a society that assumes it is worse to be a slacker than either a slave or a workaholic, but in truth, the slave experiences a level of misery and despair that shouldn’t be envied by anyone. Whether they do this out of economic necessity (as is far too often the case), because they never found a line of work that was right for them, or for any other reason, they deserve sympathy. Any society that doesn’t prioritize ending this type of slavery is unworthy of respect.

At the same time, I suspect a middle ground exists between workaholism and being a slacker. The happiest people in the world are those who strike a balance between their professional and personal lives, not only quantitatively (how much time they set aside for both) but qualitatively (how much enjoyment they derive from both). As I anticipate the years that lie ahead, I know that I have two priorities: to continue making substantial progress in my career and to develop a rich and fulfilling personal life that can accompany it.

I have my work cut out for me.

This article was originally featured at the Good Men Project and reposted with permission.