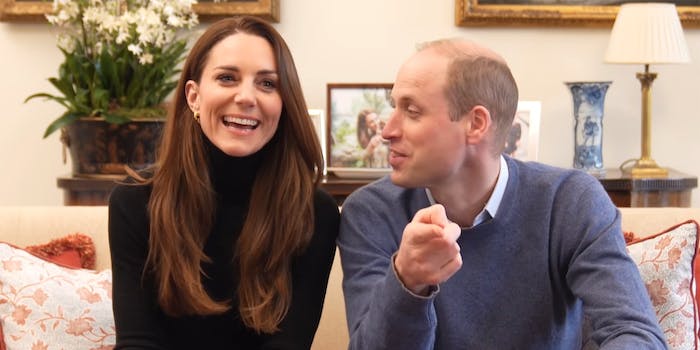 The Duke and Duchess of Cambridge

Prince William and Kate Middleton have become YouTubers. Will it be enough to convince skeptics they’re chill and relatable?

The Duke and Duchess of Cambridge—a.k.a. Prince William and his wife Kate Middleton—just joined YouTube, launching their channel with a perky teaser-trailer. A few years ago, this would’ve been a non-event. The Cambridges are already on social media, after all. But in the wake of Prince Harry and Meghan Markle’s explosive Oprah interview, this news carries a hint of damage control.

Back in March, Markle and her husband spoke out about the harassment they faced at the hands of the British media, sharing allegations of racism within the British royal family. Their Oprah interview depicted the palace establishment in a very unflattering light, reawakening old scandals and sparking debates about British institutional racism.

According to recent opinion polls, a majority of British people still support the royal family. But younger Brits are more likely to sympathize with Harry and Meghan—and they’re more likely to support abolishing the monarchy altogether. In the midst of scandal and controversy, the royals desperately need some positive PR. So now is a great time for the Duke and Duchess of Cambridge to reclaim their role as “Wills and Kate,” launching a wholesome YouTube channel.

The teaser features an upbeat montage of the duke and duchess attending events and having fun, along with a vlog-style clip of the couple chatting on a couch. Unlike traditional royal broadcasts, it avoids formality and ostentatious displays of wealth. Will this be enough to convince skeptics that William and Kate are chill and relatable? Probably not. But the channel has already attracted more than 200,000 loyal royal subscribers.