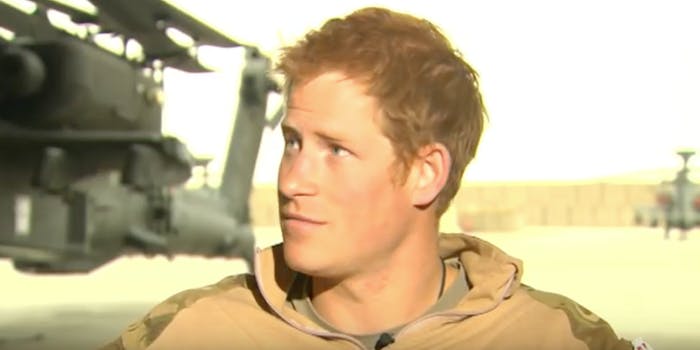 They're playing his song.

Anticipation is running so high for the royal wedding of Prince Harry and American actress Meghan Markle that it’s inspired some people to dredge up a famous old video of Harry and turn it into a fresh meme. The clip comes from a 2013 TV interview with Harry when he was on duty with the British Army in Afghanistan. In the middle of the interview, Harry is suddenly called into action and sprints away from the camera. In the meme version, people add their own background music, and the joke is that he’s sprinting toward the dancefloor because his song just came on.

The first video, which has been viewed nearly a million times on Twitter, featured Ariana Grande’s “Into You,” but there have been dozens of variations since.

Juvenile’s classic anthem “Back That Azz Up” was pretty popular:

when back that ass up comes on in the club pic.twitter.com/HBrmPsslIQ

— Diddy, flummoxed by a dollar in his possession (@aDopamineFiend) April 1, 2018

So were Beyoncé’s “Formation” and Daddy Yankee’s oft-memed “Gasolina”:

When you in the club chilling & Formation come on pic.twitter.com/Av0QBWgPFN

When Gasolina comes on in the club pic.twitter.com/7E8mzcXSPM

You can make the joke with any club banger, or go the opposite direction and pick a song that’s not exactly known for filling the dancefloor:

The Harry meme even crossed over with other popular memes from this month, like the yodeling Walmart kid:

me when im at walmart and hear the yodeling boy start singing from the other side of the store pic.twitter.com/GGMagGEFlF

This is a meme that’s of its moment and probably won’t stick around beyond this week. It’s a lovely reminiscence on a prince’s most famous exploit outside of getting married, and it’s a fun and elaborate way to say “I like this song,” but it’s not much deeper than that.

That Ariana song does bang, though. Hard to argue with that.