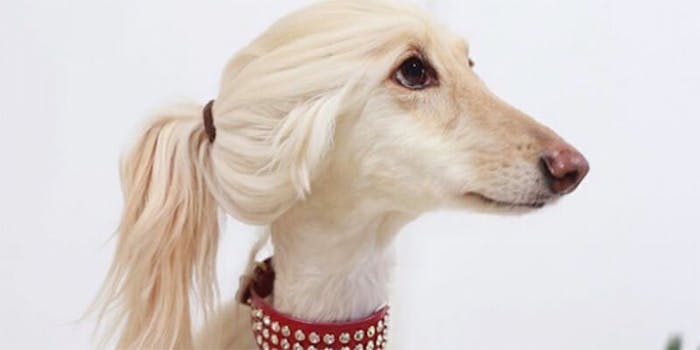 We all know the social media influencer type. She’s tall, blonde, fit, and somehow manages to squeeze making vlogs in between running her marketing company and what seems like constant baking—all while maintaining a 20-step skincare routine and a perfectly tousled ponytail.

This influencer looks just like those women. She just happens to be a dog.

A photo floating around Twitter drew attention Friday because the doggo in the picture (a Saluki) looks uncannily like the YouTube influencer archetype, ponytail and all.

People imagined what sort of personal branding projects the dog might be up to.

I think she is classier than that. It's probably called Poo.

What are the perks—and privileges—of her career?

Is she sponsored by https://t.co/qcqAZxv2BN or does she have a wish list there so followers can shower her with gifts?

People noticed she also sort of bears resemblance to the president’s daughter.

And she’s already perfected the hair needed for her lifestyle.

We don’t yet know the dog’s name or what inspirational travel blog she’ll write next. But we do know she’s well on her way to influencing the internet.