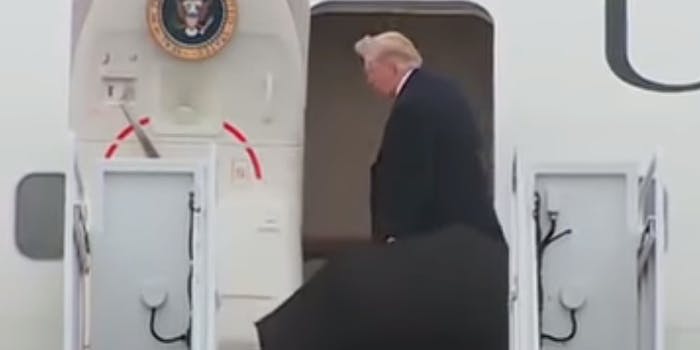 Could explain why he canceled Veterans' Day plans in France on Saturday.

Rain, rain, go away so Donald Trump can do his duties today.

Sunday marked 100 years since the end of World War I, and President Trump traveled to France this weekend to participate in a variety of events to honor those who fought and died.

But a little rain Saturday caused him to skip out on a planned visit to the Aisne-Marne American Cemetery, the resting place of 1,800 American soldiers who were killed in the battle of Belleau Wood.

The White House sent a statement saying he skipped the event due to “scheduling and logistical difficulties caused by the weather.”

Both American and European officials were quick to question his reasoning.

The former campaign adviser to French President Emmanuel Macron, Francois Heisbourg, posted a photo outside his window giving a peek at the weather conditions that kept President Trump indoors.

A view of the weather in Paris which is supposed to have deterred @realDonaldTrump from paying his respects to the brave American soldiers who gave their lives for freedom at the AisneMarne war cemetery this afternoon. Nothing a cyclist can't handle, let alone a presidential helo pic.twitter.com/60aYrKV58i

They weren’t the only ones calling out the Commander in Chief.

So Trump skipped a visit to the Aisne-Marne American Cemetery (to honor our soldiers & marines killed in WWI) due to “scheduling and logistical difficulties caused by the weather”. In other words: light rain. How pathetically lame; and yet so Trump. #NoRespect #NoDignity

Real world leaders go to honor our soldiers at an event Trump wouldn’t attend because it was damp. Snowflakes melt in the rain. pic.twitter.com/TPqdrkU71c

So Trump skipped the ceremony to honor the dead of World War One (37 million) because of a light rain.

He then told the 150,000 Californians who had to flee their homes due to fire that he might cut off federal aid.

He did this while sitting in a hotel room watching Fox News.

French President Macron and German Chancellor Angela Merkel made the journey to the site by car.

Twitter was quick to point out that maybe Trump didn’t attend because he’s not very good with an umbrella.

Twitter user @jimmyjazz1968 tweeted this image, comparing Trump to a character from Lewis Caroll’s Through the Looking-Glass And What Alice Found There.

@realDonaldTrump perhaps you could have attended if you remembered your umbrella pic.twitter.com/YJVclntDsu

Some took the opportunity to reminisce about a president who knew how to work an umbrella.

Oh look @realDonaldTrump this is how a real president deals with bad weather. And I bet he knew how to close that umbrella too! pic.twitter.com/HQsDvdaYxb

Remember when Obama cleared his schedule because of rain? Me neither. pic.twitter.com/zb9ki2em2Q

This is how you work an umbrella pic.twitter.com/P08NTQ1Urp

President Trump does seem to have an aversion to rain.

While giving a speech at the Future Farmers of America convention in October he candidly mentioned how his hair was ruined early that day because he had to answer questions about the Pittsburgh synagogue shooting outside in wet weather.

“I was standing under the wing of Air Force One doing a news conference earlier this morning, a very unfortunate news conference, and the wind was blowing and the rain and I was soaking wet and that’s what I ended up with today,” he told the group, adding that he should have canceled the appearance because of a “bad hair day.”

Yet, he doesn’t always seem to mind a little rain, as long as it’s something he wants to do.

Trump can’t honor fallen American heroes in the rain but had no problems playing golf earlier this year in it. pic.twitter.com/4LDUQHQtOU