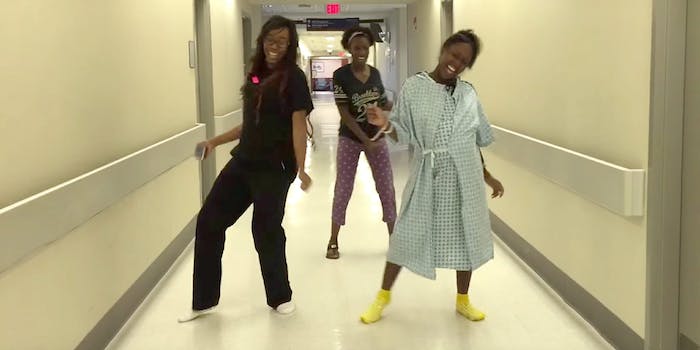 Woman in labor does the Whip and Nae Nae between contractions

Sometimes you just need to dance that baby right out of your body.

When Atlanta nurse midwife Angelina Ruffin posted a video on Facebook Tuesday of her client dancing the Whip and the Nae Nae while in labor, viewers reacted in sheer disbelief.

Many doubted that the dancing woman was actually in labor. But according to Ruffin, the mom in the video was between contractions, with a cervix dilated to 6 centimeters. Other commenters recalled their own surprisingly easy labor experiences: One woman wrote, “I had contractions 2min apart and dilated to 7 and cleaned my entire living room and kitchen.”

Not everyone’s birthing experience is so laissez-faire, of course. Labor contractions can go on for hours, even days, with extreme cramping and pain. But this mom showed that one way to deal with the pain is to dance it away.

It isn’t the first time a pregnant woman has gone viral for doing a labor dance, either. In August, Boston’s Yuki Nishizawa famously danced the Tootsie Roll while gripping at her hospital bedside.

Dancing is apparently so effective in helping women have healthy pregnancies and labors, there’s even a company called Dancing for Birth that trains instructors around the world to teach pre- and post-natal dance classes with methods designed just for pregnancy.

As for the mom in the Atlanta video, she gave birth to her first child just a few hours after doing the Whip and Nae Nae in the hospital hallway. Ruffin posted the baby photos to Facebook, showing off a healthy girl who is sure to someday star in a viral video of her own.

Correction: While Marsha Ford is the owner of OB/GYN & Midwife Associates, which posted the video, Angelina Ruffin, a partner in the practice, recorded the video and delivered the baby.