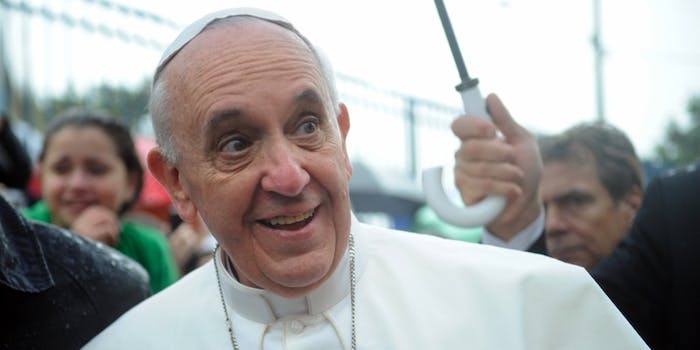 Will Pope Francis come to our swing party?

We want to impress our neighbors.

It’s our turn to host the swing party tonight, and we really wanted to make an impression. We heard that Pope Francis was going to be in town, so we thought, “He’s the cool pope. He’d definitely swing by.”

Of course, he didn’t have to participate if he didn’t want to—but wouldn’t it be something if Francis could bring that Vatican swagger to our block?

We patiently awaited his arrival early Thursday evening on 5th Avenue near St. Patrick’s Cathedral, shocked we got such a great spot. I had a feeling that his excellency would divert from his security, as is his wont, to shake my hand.

The motorcade finally showed up, near gridlock on the streets as the city prepared for the worst. Pope Francis couldn’t get away from security in these conditions. He stepped off the popemobile amid a wall of cheers. I called his name to no avail. At least he waved at us—definitely not at the people on our left. Those prudes aren’t hosting a Swing Party tonight!

We tried to send him an email, but he has no publicized address. We did the next best thing, took it to Facebook.

We tweeted at him… Not even a fav.

@Pontifex Want to come to a party tonight?

We only had one final option: Craigslist. We decided to post to Missed Connections so as not to seem like all the creepy sinners in Casual Encounters. We did miss him, after all, and there’s nothing casual about our devotion to God, Jesus, Mary, and Papa Francisco.

No word yet on whether or not he can make it, but he’s in New York until tomorrow. There’s still time to swing with the pope.

Photo via Agencia Brasil/Wikimedia (CC BY 3.0)