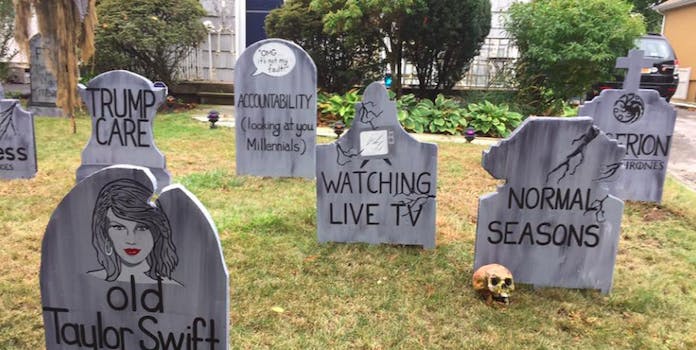 It's a spooooky cemetery for dead trends.

This Halloween, one art teacher has created a spooky graveyard where this year’s most passé pop culture trends lie buried. We won’t shed a tear over dabbing or Kylie Jenner lips, but if they rose from the grave, it would be a terrifying sight indeed.

For this, the third year of this Halloween tradition, Michael Fry told Mashable that he decided which trends to inter in his front yard by consulting with his family and students. He decided on DOA ones like “Rosé All Day” (sorry, Pinterest users and Drake) and Trumpcare (for now).

At least a couple of the trends seem to be ongoing amongst kids, as much as Fry would like them to stop. Homemade slime is a huge hit with elementary-schoolers, with one Brooklyn third-grader recently busted for running an “underground slime selling ring.” Dabbing also apparently remains popular with kids: Fry told ABC News that there’s an elementary school on his street, and kids have been doing the move in front of his house in defiance.

Some of the deaths are sad, like the end of “normal seasons” (climate change is real) and “accountability” (although Fry blames this one on millennials instead of, say, the White House or the U.S. Congress).

Fry has a pretty decent hit rate with his graveyard, but he doesn’t always get it right. Last October, he declared the end of trucker hats and Anthony “Carlos Danger” Weiner, but he also buried “Trump.” With the benefit of hindsight, we know that burial was a little premature.

And Crocs have made something of a comeback, too. What a crazy world.