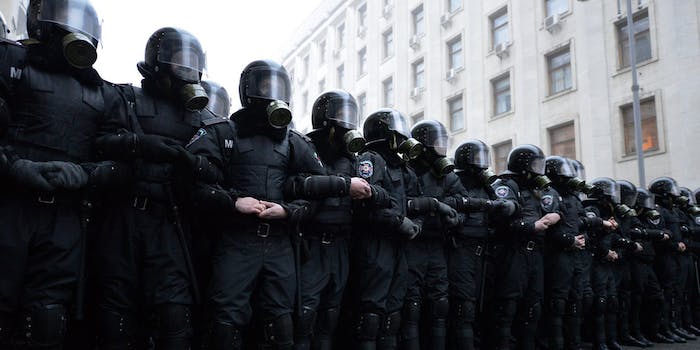 The police brutality epidemic no one is talking about

One of the biggest issues in cop killings continues to go unaddressed.

Justin Way was lying in bed with a knife, clearly experiencing a mental health crisis, when police shot him to death earlier this month after his girlfriend’s call to a non-emergency hotline was routed to law enforcement. She asked for help, recognizing that Way’s situation was beyond the capacity of the family, and what she ended up with was a dead partner.

His family maintains that he didn’t want to die and just needed support while he was experiencing a mental health setback, but the police, according to a detective, “told Justin to drop the knife and he didn’t—so they shot him because that’s what we do.”

As Twitter and social media have helped raise public awareness over cop killings, one brutal subset of those incidents has seldom been addressed: police brutality against mentally ill people. It’s critical to talk about mental illness while we talk about policing—and to address the overlap between race and mental health, because this intersection plays a increasing role in police shootings.

Kaldrick Donald was just 24 when his mother, Juanita, called law enforcement to help her son while he was experiencing a mental health episode. The family had called police multiple times before, with officers typically arriving at their home, picking Donald up, and taking him to a treatment center. That changed on Oct. 28, 2014, when the officers on duty took a different approach.

They claim he was involved in an altercation with Officer Charles Brown, with Brown forced to act in self-defense. Juanita, and Donald’s family, say he was pulling away from the officer because he was distressed and wanted to be left alone.

It’s critical to talk about mental illness while we talk about policing—and to address the overlap between race and mental health, because this intersection plays a increasing role in police shootings.

Brown tased Donald and dragged him into the bathroom. Juanita heard three shots from behind the door, followed by a whisper. “I want my momma,” he said, and then he was dead.

Multiple times a week, a mentally ill person falls to a police officer’s bullet—often multiple bullets—and there’s a widespread attitude of cultural acceptance. When such shootings do trend on the Internet, we too often dismiss them as justified in light of the subject’s mental health status; that attitude is reinforced by investigators, who very rarely consider such shootings to be instances of excessive use of force.

This was illustrated by the acquittal of the officers involved in the beating death of Kelly Thomas in 2011. In front of horrified witnesses and in full view of a camera, the two men repeatedly beat Thomas, who had been confused and was having difficulty following their orders.

And in December, just days before Christmas, police officers were absolved in the death of Dontre Hamilton, a mentally ill black man. Notably, the exoneration occurred at precisely the moment that America was infuriated by the recent outcomes of the grand jury investigations into the actions of officers Darren Wilson and Daniel Pantaleo.

Hamilton’s case highlights a racial complication within the trend of police shootings involving mentally ill people, a trend seen again in the case of Milton Hall. Hall, who was mentally ill and homeless, was shot execution style against a wall in a hail of bullets—in a case that attracted the attention of the American Civil Liberties Union for its potential civil rights implications.

Mental illness occurs at a higher rate in minority communities in the United States, thanks to stress and other compounding factors, contributing to the fact that a disproportionate number of mentally ill people shot by police are also people of color, which means the issues of mental illness and race within the justice system must be addressed side by side.

Nearly half of police shootings involve mentally ill people, and they account for 58 percent of fatal shootings.

“Milton took action to ensure and promote equal rights, and that was part of his training that he got from working with Rosa Parks. He was always addressing institutional racism,” his mother wrote, testifying to his vibrant life and history of activism before his shooting.

Mentally ill people have been shot for holding spoons, pens, and screwdrivers. Some, like Keith Vidal, who was 18 at the time of his death, posed a minimal threat to the police. While Vidal was armed with a penknife and his family had called police for assistance, their concern was primarily for his safety. Mark Wilsey, his stepfather, told a local television station: “They killed my son in cold blood. We called for help, and they killed my son.”

Many families of mentally ill people think that they’re doing the right thing when they call police for help. They’re stuck between a rock and a hard place as they desperately want assistance for family members in crisis, and they turn to first responders to help them get mentally ill people to the hospital for evaluation and treatment.

However, interactions between mentally ill people and police officers are often fatal, creating an impossible choice for families: Call the police and possibly save a life, or call the police and lose a family member.

In California, a 52-year-old woman who called the police to report that she was suicidal—and hardly a risk to first responders—was shot within minutes of opening her door. A San Jose, Calif., teen was shot multiple times when police officers couldn’t tell the difference between a cordless drill and an Uzi.

And as racial tensions swelled in Ferguson, Mo., Kajieme Powell was fatally shot by police not that far from the city where Michael Brown was killed.

Most conversations about the mental health reform so vitally needed in the United States are often focused on the wrong end of the conversation, occurring in the wake of horrific acts of mass violence like the movie theater shooting in Aurora, Colo., or the Sandy Hook massacre. That discourse makes mental illness synonymous with violence.

Mentally ill people have been shot for holding spoons, pens, and screwdrivers. Some, like Keith Vidal, who was 18 at the time of his death, posed a minimal threat to the police.

However, the vast majority of mentally ill people are not violent, and in fact, they’re at a disproportionately high risk of violence. Like other disabled people, they’re viewed as easy targets for sexual assault, domestic abuse, and violence. But instead of talking about comprehensive mental health reform—and modifications to police culture to change “shoot first and ask questions later” mentalities, the U.S. is caught in a trap of only discussing mental health from the perspective of people who are not mentally ill.

Two cases in 2014 highlighted the scope of the problem with police violence in America. The first occurred early in the year, when James Boyd, a homeless man with schizophrenia, was shot in a standoff with police in the hills surrounding Albuquerque, N.M. Boyd’s case sparked protests in the city and across the country, and as more information came out, it illustrated some of the many problems with the way police interact with mentally ill subjects.

Boyd, like many people in crisis, was agitated, anxious, and experiencing a break with reality. He believed that he was a government agent and vehemently argued with police—one of whom had threated to shoot the “f***ing crazy” man over the radio before arriving on scene—before they finally shot him, arguing that they were forced to do so in self-defense.

In Los Angeles, officers stopped 25-year-old Ezell Ford because they deemed him to be suspicious, though he, like many young black men, may have been racially profiled. After he failed to obey their orders, a sign that he may have been experiencing mental health problems that clouded his ability to understand and comply with the officers, he was handcuffed and then shot, once in the back, a detail that came out in an autopsy that was serendipitously released over the holidays, perhaps in the hopes of burying it in the news cycle.

His case was held up as yet another example of police violence against young black men in the United States, but it was also an illustration of the dangers of being mentally ill in America.

The United States is facing a twofold mental health crisis, as the nation addresses a crumbling mental health infrastructure, while being host to an environment of growing hostility directed at mentally ill people by police. Solutions for both require community advocacy and collaboration between parties with a stake in the situation, including mentally ill people, health care providers, law enforcement, and community leaders—but they also require committed funding and resources from regional and state agencies.

The vast majority of mentally ill people are not violent, and in fact, they’re at a disproportionately high risk of violence.

Effective mental health services in the United States would increase the chances of early intervention and appropriate treatment, reducing the number of people who reach a state of mental health crisis in the first place. This requires breaking down much of the stigma around mental illness to make it easier to seek help and expansion of resources beyond medications, which are only one component of effective treatment.

Patients also need counseling and access to community services like job placements, housing assistance, and inpatient treatment if necessary to help them manage their mental illnesses and achieve balanced lives.

Police officers, meanwhile, are beginning to explore Crisis Intervention Training, an approach that teaches de-escalation tactics to police officers so they can respond to reports of mental crisis more appropriately. When such training is paired with programs like Seattle’s Crisis Diversion Center, which puts mentally ill people in touch with social services instead of jail and through the court system, it can be highly effective.

Putting police officers in the position of first responders is a symptom of a broken mental health system, but as long as they’re in that role, they should receive the training they need to protect and serve all civilians—including the nearly 20 percent of Americans who experience symptoms of mental illness in any given year.