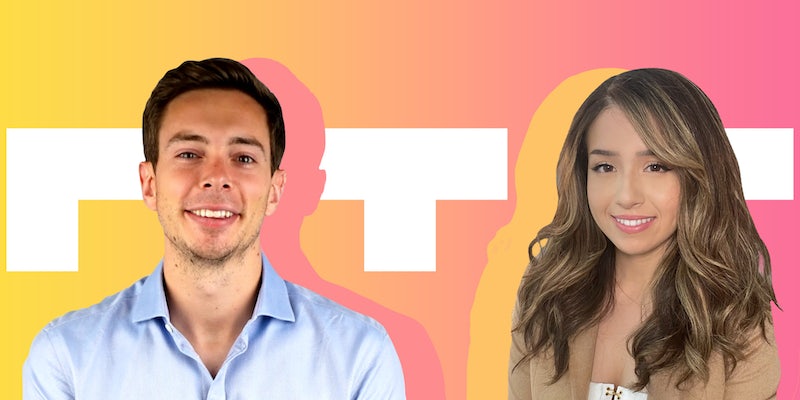 ‘I learned a lot of lessons from my own personal challenges as a creator.'

We’re sitting down with leaders on the business side of the creator economy to get their best advice for creators looking to launch and develop their careers. This week we spoke with Imane Anys, aka Pokimane—the most followed female Twitch streamer in the world and chief creative officer of RTS—and her co-founder Stuart Saw, chief executive officer of RTS.

We spoke with the founders about their long-term business strategy, helping gaming creators avoid burnout, helping brands enter the creator economy and gaming landscape, acquiring Evo, what they’re looking for in creator clients, and more.

Pokimane is the top woman streamer in gaming, having over 9 million followers on Twitch and widely recognized for gameplay in Fortnite, Valorant, League of Legends, and Among Us. In addition to her massive following on Twitch, she has over 26 million followers across TikTok, Instagram, Twitter, Facebook, and her multiple YouTube channels. She is a founding member of creator collective OfflineTV and is well-recognized for her business achievements, having been named on the Forbes “30 under 30” list in 2021.

Anys told Passionfruit she first started thinking about business strategy as a college student, when she first realized she wanted to become a streamer—and she made a PowerPoint presentation with income projections to convince her parents full-time streaming was a viable career. Now 26 years old, Anys said “optimization” is still a key part of her life, and she tries to approach content creation and SEO [search engine optimization] in an incredibly strategic manner.

“I intentionally worked on my YouTube channel and Instagram page early on and made a conscious effort to try to funnel over that audience to my Twitch channel. That same mentality has bled out to beyond gaming as well. I want to be able to utilize the brand I’ve grown within gaming to bolster my initiatives in other interests like philanthropy, beauty and lifestyle content, and most recently, entrepreneurship via my work with RTS,” Anys described.

RTS—a business name with a head-nod to real-time strategy gaming—was recently founded by Anys and her co-founder, CEO Stuart Saw, a Twitch and Endeavor alumnus. Alongside Saw’s expertise, Anys told Passionfruit she wanted to bring the lessons she learned from her early career as a creator to build out a talent management and brand consulting firm that properly addresses the challenges creators face.

“Having built my business alone, I learned a lot of lessons from my own personal challenges as a creator and also the plethora of brands I worked with along the way. I co-founded RTS alongside other incredible industry professionals who all have deep roots in gaming and esports. We’ve all seen the evolution of how brands have worked in the space, and have the knowledge to support and help brands integrate authentically into the gaming industry,” Anys described.

Saw, who started off his career as a commentator for esports tournaments, is a business leader who notably spearheaded Twitch’s launch in Europe and general business direction as the platform’s director of strategy. He also worked on brand strategy, event production, talent relations, and a partnership with Epic Games as Endeavor’s senior vice president of esports. Saw told Passionfruit he met Anys around a year and a half ago while working at Endeavor.

Saw said Anys has witnessed “bad actors” in the space misguide her and her fellow creators, presenting unfavorable deal structures. When comparing the new firm to other companies, he said RTS being a talent management group and not an agency makes the company have a less transactional relationship with talent—because the company is not hard-selling deals for short-term rewards and is more-so prioritizing the long-term health and sustainability of a creator’s career.

“Imane has been very keen to make sure there is transparency, standardization, just help for creators to accelerate their growth so they can kind of expedite to where they should be, which is focusing on their craft and expertise rather than having to look over their shoulder and worry about, are they being taken advantage of,” Saw said.

Anys thinks one of the biggest challenges for gaming-creators is maintaining a healthy work-life balance. She said building out a team to outsource some work is one of the most important steps a creator can take to address burnout. Anys herself personally announced a break from streaming in July to reset her mental health.

“There is a huge misconception that streaming and creating content for 12 hours straight, 7 days a week will make you successful. While that process can certainly bring in higher numbers early on, it will absolutely lead to burn out…I choose to invest in other parts of my life on both a personal level and business front as well. By diversifying my time in business meetings, investments, and personal projects, it makes me look forward to my content creation time even more,” Anys said.

Beyond helping creators directly through talent management, Anys strives to advise brands who want to work with creators in the gaming industry, to help them “learn the landscape and add value to the community, while achieving their goals and reaching their target audience.”

Saw said RTS has a “strong consulting” side of the business to encourage long-term sustainability for companies looking to enter the gaming and creator industries. For game developer clients, like Epic Games and Riot Games, RTS helps develop esports structure and strategy, brand strategy, and commercialization—meaning it brings new products to market. For brands like Facebook, RTS strives to provide info on gaming and creator communities and help attain multi-year deals. For its client PlayStation, owned by Sony, RTS is focused on helping on event operations and commercialization around esports tournament Evo.

Evo is a long-standing and hugely popular annual fighting game tournament, which took place earlier in August. In March, Sony and RTS announced their joint acquisition of the major gaming event.

“Evo is a beautiful event. There’s nothing better than just the raw passion that comes from the fighting game community. And it sits right in that suite of problems that we’re hoping to be able to work on—it’s an underserved community, it has its own nuances and its own sensitivities,” Saw described.

Looking toward the company’s future, Saw said RTS is working on launching some new “big” business ventures with upcoming clients in the next few years. He also said the company is currently looking for creators who can work on new businesses and “accelerate their brand and new and different directions” within the creator economy.

Heading into this next chapter in entrepreneurship, Anys said she is striving to help brands and creators “authentically integrate” into the world of gaming.

“On the brand front, we are here to help brands learn the landscape and add value to the community, while achieving their goals and reaching their target audience. As for creators, we aim to help minimize everyday stressors in their lives, while maximizing their business and reach their next career goal,” Anys said.

Are you a leader behind a new creator economy company? Email [email protected] for a chance to get featured in an upcoming newsletter.