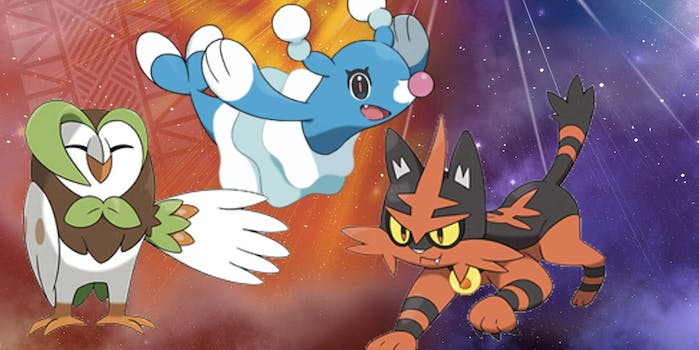 Images via The Pokémon Company

New, evolved Pokémon from Sun and Moon get roasted like the originals

They're taking almost as much heat as the starters they evolved from.

When the Pokémon Company announced the new starter monster for Pokemon Sun & Moon back in May, the internet roasted the hell out of them. Some were excited for Rowlet, the round owl, but everyone hated Popplio, the smug-looking seal.

On Tuesday, we finally got to see what these unfortunate creatures evolve into:

Meet Dartrix, Torracat, and Brionne. They… are garbage.

Dartrix evolved from the cute and chubby Rowlet, who was the only new starter people seemed positive about. Looks like that’s ruined now.

folks *tapping mic* you see this shit. instead of pokemon evolution they should call it *louder so people in the back can hear* emo-lution pic.twitter.com/7tpIOGcpB4

dartrix looks like one of those stereotypical rich pretentious anime characters

When people tell me Dartrix is the worst middle starter evolution of all time, forgetting that Quilladin exists pic.twitter.com/Jo3Cql3U01

RIP Rowlet. And Torracat, the new evolution of Litten the fire kitten, is getting roasted too—for being too conservative.

There's nothing wrong with Litten's evo, it's just "bigger Litten". The other two evos have a ton of personality, which I love

Brionne got more poppy, Dartrix got more sophisticated, and Torracat got… umm… bigger… That is how I see it at least.

Dartix: Amazing! Rowlett is running away as the best starter! Top 150 for sure.
Torracat: Yawn. Nothing new here. Bottom 200.

— Do Not Watch The Game Of American Football, Please (@LakdifFlanchzed) October 4, 2016

Torracat, meanwhile, is basically Litten except buff and less scraggly-looking and that's kinda boring to me

And what’s that on its neck?

can we mention torracat’s fire testicle yet

i know it's supposed to look like a bell but that thing on torracat's neck is like… a third, exposed, eyeball

Can't wait to see the Torracat nsfw too

Hoo boy. OK, moving on to Brionne, who evolves from the much-maligned circus seal, Popplio. The critics are surely going to destroy this one, right?

Everyone who hated Popplio is loving Brionne so I'm Warey

I LOVE BRIONNE SO MCUH GIVE ME 10

I need Sun and Moon to get here already. Brionne is a little princess.~❤

There’s certainly plenty of hate for Brionne, but most of it seems to be centered on how “feminine” the evolution looks.

Dartrix and torracat are really awesome! But I don't like brionne… It's just to feminine 4 me :/ pic.twitter.com/7i2r2gCxIq

Brionne looks like she got eliminated in episode 2 of Drag Race pic.twitter.com/hMCDfMYmHu

Same. And Brionne makes it worse…They should never make starters so feminine looking with that gender ratio. <.<

For the most part, though, Brionne’s not getting roasted like Popplio did. On the contrary, Brionne’s got many vocal defenders, some of whom have supportively claimed her as a trans girl Pokémon.

Anyway Brionne is great and @jimmmyman10 is correct, she is a trans girl and is v beautiful #pokemonspoilers #PokemonSunMoon

Sometimes, the opinions evolve with the Pokémon. Other times, though, it’s just a bigger Litten.