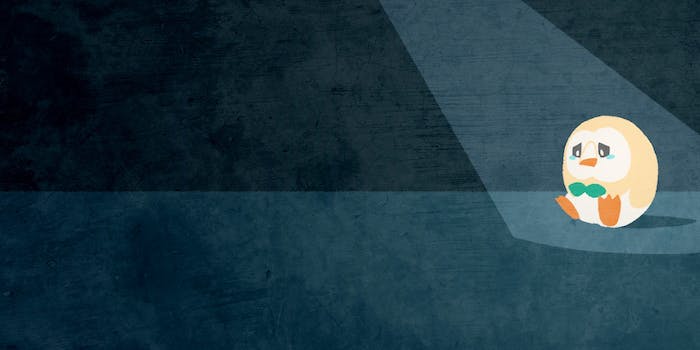 The Internet has already roasted the new Pokémon to a crisp

It’s been observed that each new generation of Pokémon incites to critics complain about how much the designs suck, especially compared to the first-generation characters, long considered the gold standard.

Today, the Internet met the three starter Pokémon for the upcoming Sun and Moon games and immediately gave the poor li’l cuties more than enough reason to run screaming back into their pokéballs.

Here they are! The three first-partner Pokémon in #PokemonSunMoon, launching for #3DS on 11/18. Who will you choose? pic.twitter.com/xs54pRT9SJ

Look at this misbegotten creature. It’s called Rowlet, clearly created while its designer was craving a delicious cinnamon roll:

i want to shove that owl nerd into a locker

And that’s the best one! People actually kind of like it!

"Which starter Pokemon should I pick" shut up and watch pic.twitter.com/reLkdAbFdg

Litten, the catlike fire-starter, has suffered a bunch of obvious “it’s lit!” jokes and one very undignified comparison to Shadow the Hedgehog.

Games not out for 6 months but I've already picked my starter. #oops #pokemon #Litten pic.twitter.com/LeBnA5YwMp

The new sea lion Pokémon, Popplio, has taken the biggest bashing, and is far, far behind the other two in popularity polls. But again, that’s nothing new. Remember what happened to Oshawott, the water starter from Black and White? It’s an accepted part of the canon now, but it was heavily dumped on by armchair Pokémon designers when it debuted.

Everyone hating on the Water starter reminds me of this. Literally Gen 5 all over again. pic.twitter.com/JSYBbV4RAA

@Avianite Hey, remember when we shat on Oshawott for its design, six years ago?

Over on video games forum neogaf, someone compared all three of the “disappointing” new Pokémon to that most disappointing of Sunday comic strips, Garfield. This burn is extremely sick and should be treated by a doctor immediately.

We could at least wait until we see their evolutions to pass judgment, though, right?

Meanwhile, brands struggle—as per usual—to turn the Pokémon reveal into #marketing #content. Big ups to Arby’s and to the nation of Canada for particularly forced attempts.

the debate is over; i will brook no dissent. @Canada @Pokemon pic.twitter.com/tWimuL3YVI