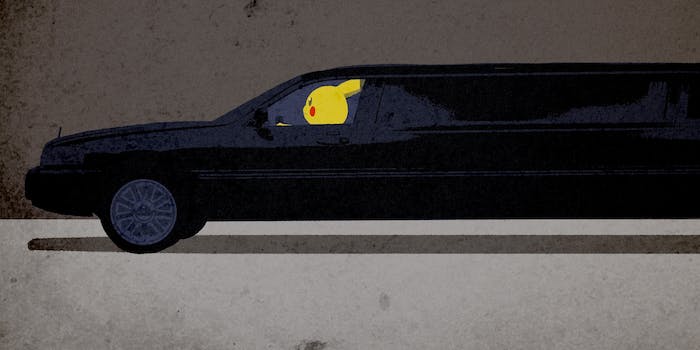 I hired a Pokémon Go chauffeur and played in ultimate luxury

Adam Smith’s invisible hand has struck again, and it chooses you, Pokémon Go! CNBC calls it the Pokéconomy—the avalanche of real-world businesses making mad cash off the gaming phenomenon. Rideshare drivers for Uber and Lyft gotta catch all your dollars. And if you search Craigslist, you’ll see dozens of indie entrepreneurs willing to drive you around as you play.

I decided to do some shoe-leather journalism and get the scoop, carefully noting the expenses for my 2016 tax return. ?Walking is great, I guess. But being taken on a Pokémon Safari was one of my lifelong ambitions. Did I dare believe it was finally coming true?

I immediately started emailing complete strangers, asking to ride in their car. This Boston ad in particular struck my eye: 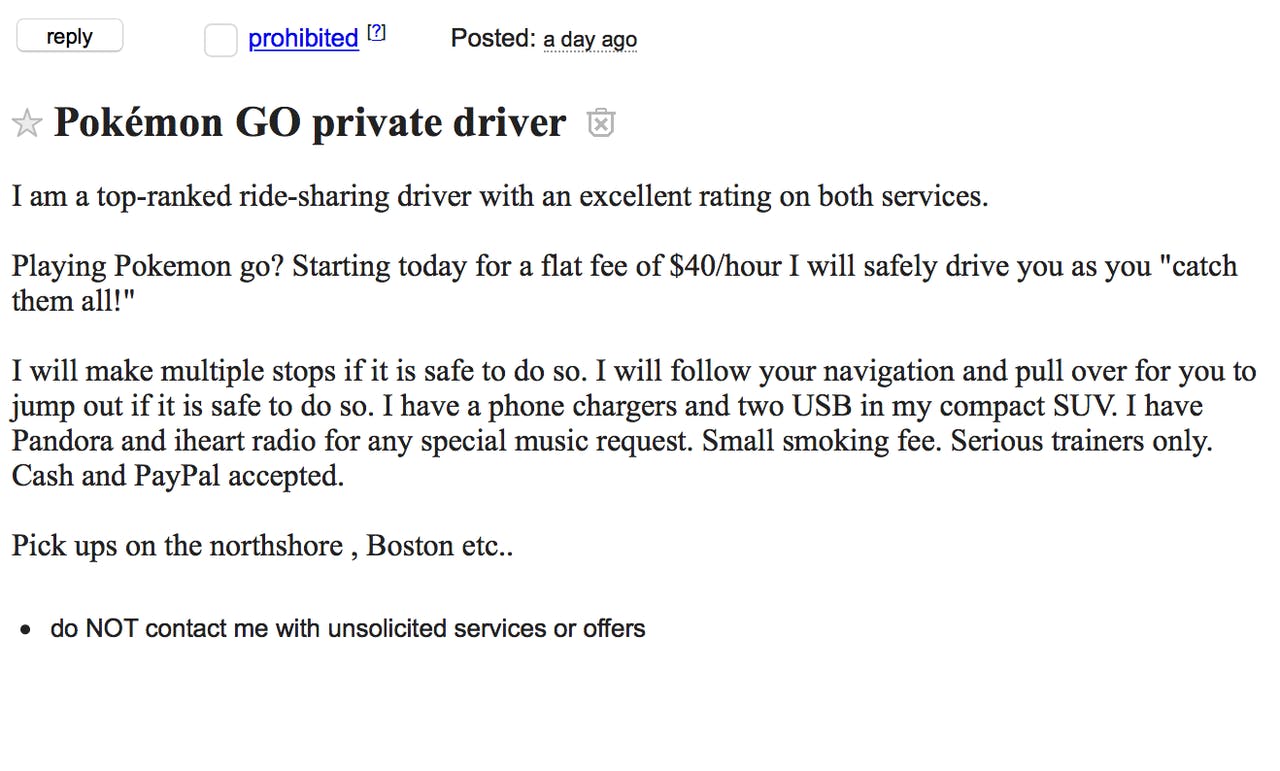 Like Ash, the legendary first Pokémon trainer from the Year of our Lord, 1996, I knew this was my destiny. My fingers nervously trembled as I typed my response:

I am very interested in paying for your service to drive me around to catch Pokémon. Your fee of $40 is acceptable to me. I do have some questions:

1. Would you be willing to refer to my partner and I as “Team Rocket?”
2. We plan to use the Pokémon we catch to profit as we work towards world domination. Do you have any ethical issues with this?
3. I am Team Valor. Is your car red?
4. Do you know a spot where I can score some good Pikachu?

Looking forward to blasting off again.

The answers came quickly. I opened the email breathlessly.

AMEN POKÉMON BRETHREN (TEAM ROCKET)!
Ethical issue with world domination? None. Car is green, however, it can be painted red.
I’ve got the Pikachu!

SCORE. However, Pokécomplications were quick to dash my dreams. Because the Pokéconomy was such a high-demand sector, I had to book an appointment. Frankly, that’s not the instant gratification I’ve grown to expect, Craigslist.

Undeterred, I replied to another ad, asking them to pick me up at the Alewife T station in North Cambridge. I quickly received another rejection:

Hmmmmm. Maybe this was the kind of problem money could solve?

?I NEED THE PokéMONZ. I’m willing to drive to South Shore – or to the very gates of hell just TBH. I’LL PAY DOUBLE WHAT THE OTHER PERSON IS PAYING YOU.

But it was still no-go. Fighting back tears, I continued to email strangers.

Then, a different sort of ad caught my attention. It described a service that seemed to cater to high-class individuals like myself. Batteries and refreshments? Thumbs up, I thought—let’s do this. When they replied to my request for a ride, I saw they had even secured an email address @pokegosafari.com. Amateur hour was over.

They agreed to take me and my husband on a Pokémon dream Safari. Excited beyond words, Team Rocket suited up, using masking tape to put a large “R” on each of our chests.

Our guides agreed to meet us in a poorly paved parking lot. As we walked up to our Pokéchariot, it seemed to glisten in the setting sun—a $42,650 Mercedes Benz C300 whose features included a three-sPoké multifunction steering wheel, premium leather seats, and what the Mercedes Benz website advertises as “Seat Belt Technology.” Good. Catching Pokémon involves frequent abrupt stops in traffic thoroughfares, so safety is important. 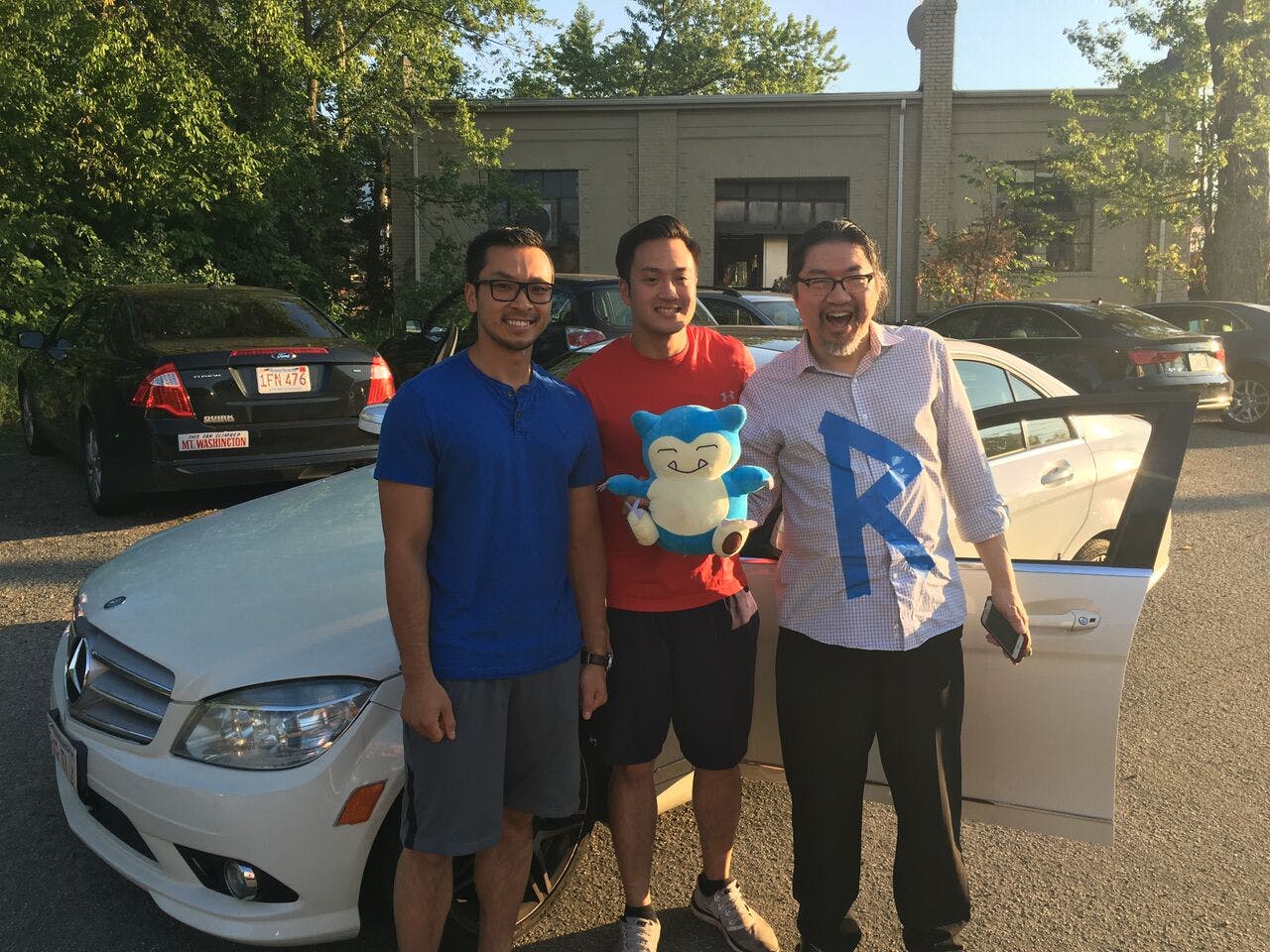 The entrepreneurs were Berny Tran, the owner of PokégoSafari, who keeps a side job in mechanical engineering, and his partner, Tao Phan, a validation engineer in biotech. Both are in their mid-20s, and their passion for Pokémon cannot be denied. Their American business instincts told them the Pokéconomy was the future. They were all in.

We were provided a large bag of Nacho Cheese Doritos.

Even as a video game developer, I was quickly overwhelmed with Phan’s expert knowledge of Pokémon Go. I was Ahsoka Tano to his Anakin Skywalker, intent on his every word as he shared the secrets of the game.

“People have cheated egg hatching by tying their iPhones to a ceiling fan and letting it spin,” said Phan. “It thinks you’re walking so your eggs hatch faster.”

“There was a Pokémon episode where a trainer didn’t have true love in their heart for Pokémon and lost. Isn’t that a violation of the Pokétrainer spirit?” I asked. Disgusted, Phan hung his head low, and sadness crept into his voice. “It ruins the whole point of the game,” he said. “Why would you do that?” Each of us was paying $30 an hour to ride with PokégoSafari. But, interestingly, it was a good deal compared to the in-app purchases of Pokémon Go. Tran drove us to Boston Common, taking us to areas rich with PokéStops, letting us farm seemingly endless Pokéballs and other items for free.

Phan spoke excitedly about his expansion plans with PokégoSafari: A fleet of luxury cars that would let people explore Boston while collecting Pokémon.

“Would you be willing to talk to Google’s Alphabet to secure venture capital?” I asked.

“Yes. I think I could find time to talk to Alphabet,” said Phan. “Our business plan is still being put together.”

We slowed as we approached downtown Boston, which allowed us to start reducing the PokéBioDiversity.

“There’s a Jinx up ahead,” yelled Phan. “COLLECT, COLLECT, COLLECT,” he ordered. My fingers wildly tapped the screen, following his instructions. My PokéPartner Frank Wu, whose face was covered with nacho cheese Dorito dust, was frantic.

“My app is stuck!” he screamed.

Phan was calm under fire, taking control of the situation. “RESTART THE APP, FRANK. RESTART!” Eventually, we found a parking spot in Boston Common, the historic American site where the British army camped in the Revolutionary War. This was the ground where our enemies had planned the deadly battles of Lexington and Concord. Now, a new war had begun—the fight to secure the Pokémon gyms. My nemesis, a Snorlax, slowly rotated in the nearest gym, cruelly taunting me. I knew that with the mentorship of PokégoSafari, it was a battle I could eventually win.

Walking through the Common, I saw literally hundreds of Pokémon Go players. “The more people, the better the Pokémon,” explained Phan. One group seemed to shimmer in the distance like a mirage. Sitting on a blanket were the two original prophets of Pokémon, Misty and Ash. They offered a bowl of candy. “Is this free?!” I asked, wondering how the day could get even better. “Help yourself!” exclaimed Misty.

?It turned out, Misty had grown up to become a graduate student in Neuroscience at MIT. Whoa. Her Pokétraining had really paid off—along with her belief in herself. Neuroscience Misty was in Boston Common to meet other players and share tips as well as delicious refreshments. An awesome group of Pokétrainers surrounded her. Before long, I was giving out my Facebook info so we could keep in touch. In all my years as a professional in the game industry, I had never seen anything like what I Pokéxperienced in Boston Common. Social events for gamers are usually more like Boston’s Pax East, filled with competitive hardcore gamers. This was friendlier, more relaxed, more social.

Of course, we were not locked in deadly battle over the nearby Pokemon gyms, where social rules are voided and only the strong survive. For the moment, we were friends.

Eventually, the sun started to set over Boston. Our wallets drained of PokéDollars, Phan and Tran drove us back to our car. Our Pokédex was absolutely bursting with Meowths, Psyducks, and Geodudes. This had been a PokéSafari extravaganza beyond my wildest dreams.

And perhaps I’d been fortunate enough to meet the next Mark Zuckerburg. As I pondered the promising future of PokéGoSafari, I wondered if there was any way their business could provide any more magic.

“You can keep the bag of Doritos” said Phan.