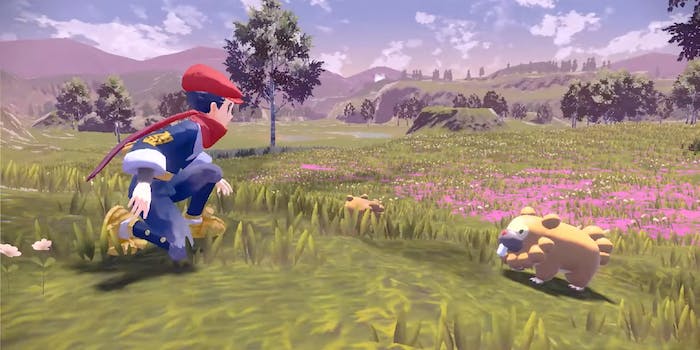 Remakes of Pokémon Diamond and Pearl!

The Pokémon Company revealed two new games centered around the Sinnoh region during a Pokémon Presents video, one of which fans have been waiting years to arrive.

The first round of games Pokémon teased for the Nintendo Switch are Pokémon Brilliant Diamond and Pokémon Shining Pearl, which are both remakes of Pokémon Diamond and Pokémon Pearl, respectively. First released for the Nintendo DS in 2006, the revamped versions of these games update the graphics and use chibi-esque character designs but largely keep the look and feel of the original.

It’ll include everything fans of Diamond and Pearl will recall from its selection of starter Pokémon—Turtwig, Chimchar, and Piplup—to Dialga and Palkia, the Legendary Pokémon in Diamond and Pearl, respectively.

If you’re a fan of the Sinnoh region, the Pokémon remakes aren’t the only treat that the Pokémon Company had in store. It also introduced Pokémon Legends Arceus, an open-world RPG set well before the events of Brilliant Diamond and Shining Pearl. It offers a vast array of world-building within the world of Pokémon, including wooden PokéBalls and a time when Pokémon roamed around the wilderness.

Visually, it’s fairly reminiscent of another Nintendo Switch game, Legend of Zelda: Breath of the Wild.

We’ll have to wait a while for Brilliant Diamond, Shining Pearl, and Pokémon Legends Arceus. But that doesn’t mean that people aren’t already gearing up to purchase these games—and hyping up the games for when they finally get their hands on them.

Some fans are gearing up interest in the few details we’ve already gotten about Pokémon Legends Arceus.

Others are also remembering aspects of Diamond and Pearl like Cynthia, the Sinnoh Pokémon League Champion whose theme music often brought a sense of dread to anyone who had to face her.

And a lot of fans made the connection between Pokémon Legends Arceus and Breath of the Wild.

Brilliant Diamond and Shining Pearl will be released later in 2021, which falls on Diamond and Pearl’s 15th anniversary, but Pokémon Legends: Arceus won’t be available to buy until early 2022.