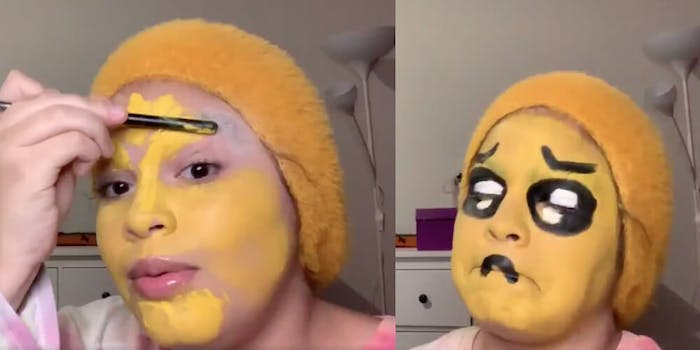 Did she nail it?

A Twitter user has the whole internet smiling with her hilarious “pleading face” emoji makeup tutorial.

In the approximately one minute video, Twitter user @nyahanto transforms herself from a normal human to her best version of the yellow-faced, “pleading” emoji–and the end results are gold.

“turning myself into the [pleading face] emoji,” she tweeted, along with the approximately one minute video.

The emoji consists of large, “sad” eyes and a frown:

Since nyahanto posted the video, it has exploded online with over 1 million views and tens of thousands of retweets and likes.

“Oh my God, I look like a minion,” she exclaims upon first seeing her face completely covered in yellow makeup–while also wearing a yellow beanie to match.

But by the end of the video, she is more than pleased with her artwork.

“That was it!” she excitedly says toward the end of the video, after taking a glimpse of the finished look. “I think I’m finished!”

The internet was apparently just as excited by her emoji makeup tutorial as she was and is especially entertained by the last shot of the final result.

“This video brought me [more] joy than anything or anyone in the last week,” Twitter user @itsanyssa wrote.

Some are even pleading with nyahanto to create more emoji-inspired makeup videos.

“This is the cutest shit ever, please do another one so I like in pure bliss again,” Twitter user @Kaonchaos requested.

For now, there is at least one other emoji makeup look nyahanto has shared: the clown emoji. She also “plugged” her YouTube channel in the replies under the tweet–most users plug something they want others to see, like their artwork, SoundCloud links, or social media handles when they go viral. In one of her YouTube videos, she also turned herself into Peppa Pig.