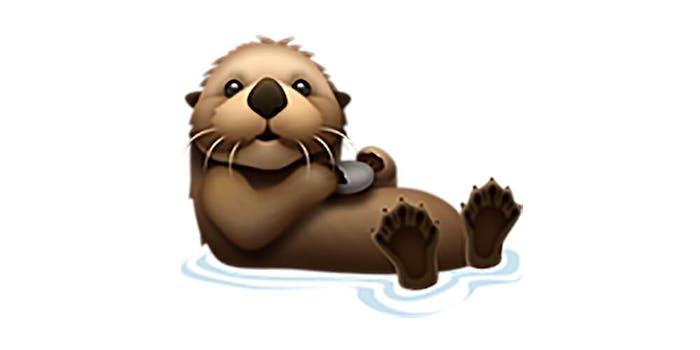 Brb adding an otter emoji to everything

On Monday, Apple released iOS 13.2 update, the star of which is arguably all of the fancy new camera features included within. But the update also includes 60 new emoji. New emoji include gender-neutral characters, interracial couples, and characters with disabilities. And yes, iOS 13.2 also includes — the otter. Most importantly, you can now slap a cute, little chubby-faced otter into every single one of your conversations.

Naturally, the internet is going nuts over this cute little guy.

the only good news i have read today https://t.co/oQOpeMbiWW

i'm too excited about this #otter https://t.co/ifCwqSsMiR

i will kill anyone that disrespects this otter and their rock https://t.co/tLOEOU1bLi

protect him at all costs https://t.co/oRHiik7DjC

The first time I've come close to lamenting not having an Apple phone: https://t.co/Ap7wZpsOXN

Immediately after I get an Android. Fucking typical. https://t.co/7rilQfg7Xh

The Shedd aquarium in Chicago got in on the excitement too.