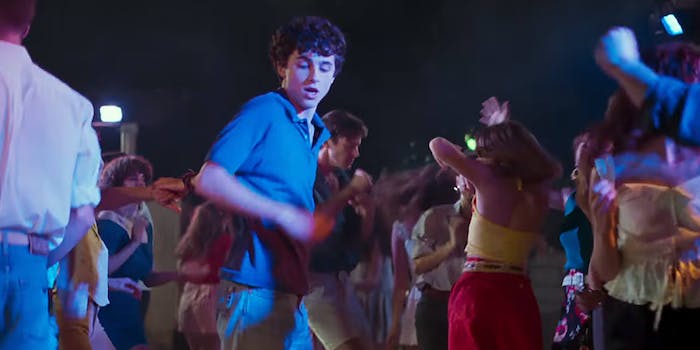 The 2015 song is back on the charts after becoming an anthem for slow-motion thirst edits.

The “Timmy” in question here is Timothée Chalamet, a frequent focus of TikTok’s attention. And the “trend” involves a slowed-down Chalamet from Call Me By Your Name‘s iconic dance scene.

Know Your Meme points to an April 17 TikTok from @sandy.0234 as one of the first iterations, which features Little Women Chalamet, as well as Tom Holland, Harry Styles, and Dylan O’Brien. However, another clip from the same date features just a sparkly slow-motion Chalamet.

Nearly a month later, the song has been used in more than 1.3 million videos, and there are multiple tutorials for making Timmy edits, which describes the style of edit rather than something Chalamet-specific. Though the song has been revived by this challenge, it was fairly popular before April too.

The trend has seen parodies and, uh, variations.

Martinez’s song, from 2015 album Crybaby, has seen a bump on Spotify and YouTube, and charted again—yet another older track revived through a TikTok trend. The attention has also renewed discourse around a 2017 allegation of rape made by a friend of Martinez’s, which Martinez has denied.

The 25-year-old singer told Idolator she was “Incredibly surprised” about the resurgence of the song and that she’s prepping an actual music video for “Play Date,” which she’ll record at home. She also released her own Timmy edit.