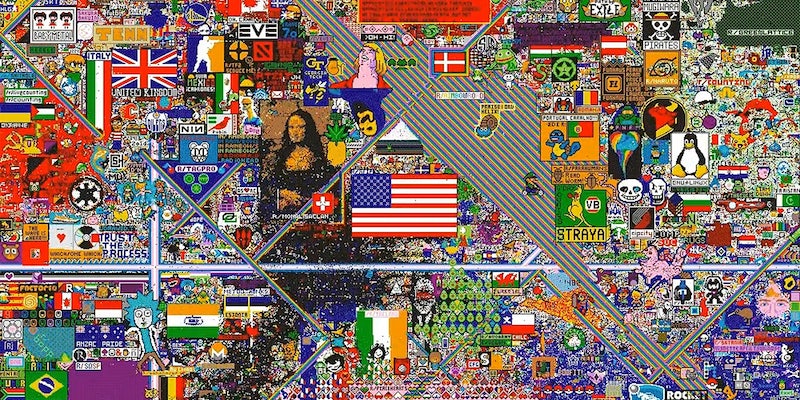 Reddit gave its users a pixel canvas, now everyone is fighting to control it

Over the weekend, Reddit transformed from a place to discuss the latest news and memes to an all-out war for space on a large, empty canvas. The social experiment, called Place, launched on Saturday with this cryptic announcement:

There is an empty canvas.

You may place a tile upon it, but you must wait to place another.

Individually you can create something.

Together you can create something more.

Redditors quickly discovered how Place works: Anyone with a Reddit account can place colored pixels on the board; the catch is that you can only change one square every five minutes. That makes it very difficult to draw a coherent picture unless you coordinate, which is exactly what factions from various countries and subreddits started doing.

Place started out with a few landmarks that were easy to draw, like a blue corner and a rainbow road, but it has since evolved into carefully orchestrated pixel art of video games, anime characters, logos, and national flags. It’s hard enough to draw something large and elaborate as a group, and it’s even harder to keep it from being painted over by opponents and vandals. The American flag has been redrawn several times after assaults from other countries as well as attempts to replace it with a rainbow.

One of the biggest and most contentious features on the map is a giant logo for the freeware rhythm game OSU!, which takes the form of a big pink circle. It’s been attacked numerous times by people who think the amount of space it takes up is outsized compared to the number of Redditors who actually play the game, and a popular League of Legends streamer allegedly told his fans to destroy it. But the wall of pink refuses to die:

Other major features of the place landscape include a Windows task bar at the bottom of the screen (complete with Start button), a large green lattice in the upper right corner, and the entire “Tragedy of Darth Plagueis the Wise” from Star Wars prequel Revenge of the Sith, which became a meme earlier this year.

And then there’s The Void, a group that works together to eat various Place artworks with a swarm of black pixels. It might seem cruel to erase others’ hard work, but some say the void is “a vital part of the r/place ecosystem. Like a forest fire making way for new life.“

The Void isn’t killing Place, but scripting might be. Rather than forming large groups and working together to build big images, some people have automated the process and used multiple bot accounts to control the board on their own. Users are begging Reddit to add a captcha to Place, so only humans can edit the pixels and fair play will be restored.

It’s not clear how long Place will last, or whether the experiment will be sustainable, but for at least one weekend, it changed the entire nature of Reddit.

Update 6:14am CT, April 4: Here is a time-lapse of the entire process.