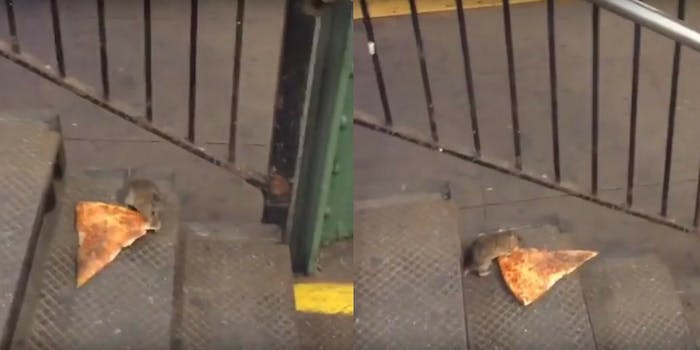 While #PizzaRat is indeed endearing, the implicit joke here is really sad

If you’re at all aware of what the Internet is, you’re likely aware of #PizzaRat, the YouTube video that is exactly what it sounds like: a video of a mouse attempting to carry a slice of pizza down a flight of stairs at the New York MTA. Posted by Matt Little, the 14-second clip quickly racked up 6 million views and counting. The clip was so ubiquitous that it quickly spawned its own “cute animals playing with trash” franchise, most notably a 45-second video of a squirrel drinking a milkshake from the garbage and the entire crabs holding cigarettes meme.

The fact that social media would share an animal video is the least surprising thing in the world—as the Internet is basically run by cats and overwritten thinkpieces on Miley Cyrus. While #PizzaRat is indeed endearing—the peak It Me moment for every New Yorker—the implicit joke here is really sad: The largest city in the U.S. is so inundated with garbage that we just can’t help but laugh at how disgusting it all is. It might seem adorable when it’s a YouTube video, but for the residents who have to live in it every day, the reality is less LOL-worthy.

Would it be news to you that—in 2012—Travel and Leisure voted New York the dirtiest city in America? Of course it wouldn’t. New York is widely known for its garbage problem. It’s one of the most polluted major metropolitan areas in the U.S., behind cities like Los Angeles, Houston, Dallas, and Washington, D.C. It’s not just that the Big Apple is the most trash-happy city on the entire planet; it’s that the city is nearly three times as wasteful as Moscow, its nearest competition. This helpful graph will put it into perspective for you. 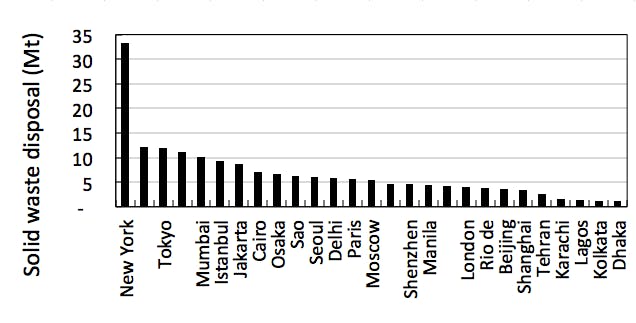 Proceedings of the National Academy of Science

The research for that graph came from a massive study from 28 authors in the Proceedings of the National Academy of Science. The report’s Chris Kennedy writes, “The New York metropolis has 12 million fewer people than Tokyo, yet it uses more energy in total: the equivalent of one oil supertanker every 1.5 days.” As Vice’s Brian Merchant explains of the study, New York is only part of the problem, as megacities “account for nine percent of the planet’s electricity use, drain 10 percent of its gasoline, and create 13 percent of its trash.”

If New Yorkers have a penchant for overconsumption, the city seems to be unable to address it with healthy sanitation policies. Dubbed New York’s “trash wars,” the city’s garbage culture varies slightly by neighborhood. Whereas the wealthy Park Slope areas of Brooklyn maintain relatively clean streets (for New York, anyway), sanitation norms lag behind in more diverse, blue-collar neighborhoods like Harlem or Crown Heights, where the only time you don’t see trash littering the streets is when the winter snowstorm covers it up.

If New Yorkers have a penchant for overconsumption, the city seems to be unable to address it with healthy sanitation policies.

In an essay for the Daily Dot, Zaron Burnett III argued that trash—or the lack thereof—correlates with gentrification: In the ‘90s, garbage piled up in areas like Fort Greene “because sanitation services weren’t a priority.” However, such neighborhoods have drastically changed in the last decade—pushing out people of color as rent increased. He asks, “How come when it was a predominantly brown, black, and Jewish neighborhood, the trash trucks didn’t show up as often as they do now that young, prosperous, white people are moving [in]?”

But even residents in Brooklyn neighborhoods like Midwood—one of the least diverse in the entire city—are feeling the literal stink of the city’s garbage woes (if you think I’m exaggerating, walk on Canal St. on a hot summer day). “At the junction of Avenue J and East 14th Street, the trash was spilling far out of its intended receptacle—and was piled up in bags and heaps next to it,” New York’s CBS affiliate reported in 2013.

Tackling those issues will prove crucial to the city’s long-term livability—both for the city’s animal and human residents. According to estimates from U.K.’s the Guardian, New York’s issues are just as bad as ever, as the city generates 50,000 tons of garbage a day. A much more terrifying perspective from Transform Don’t Trash NYC tabulates that number as 5.5 million tons each year. Only a quarter of that tonnage is recycled—and as resident complaints show, a great deal of it ends up piled in the streets.

Nearly a decade ago, former New York mayor Michael Bloomberg heralded a 20-year plan that would radically transform the city’s relationship to waste, which the New York Times reported would “rely more on barges and trains and less on trucks that carry garbage out of state.” Until 2001, almost all the city’s trash was disposed of on Staten Island at Fresh Kill’s Landfill, and despite the change, the city has yet to resolve the crisis. In 2013, the Guardian all but declared the city’s ongoing attempt to fight “throwaway culture” an utter failure.

The paper’s Sadhbh Walshe argues that this is partially due to the nature of living in New York itself. “The culture is such that many people think nothing of eating out twice a day and ordering in a third meal at home, despite the mountains of refuse generated from such a lifestyle,” she writes. That might be true, but it’s hard to envision a sustainable model of living in a city that remains itself unsustainable—from a crumbling subway system to soaring rent prices. If Walshe is right, changing New York’s culture starts from the top.

Unless the city has sound leadership on issues that have plagued residents for generations, this situation is unlikely to change anytime soon. So if you like Pizza Rat and cute garbage videos, here’s some good news for you: There are 5.5 million tons more where that came from.