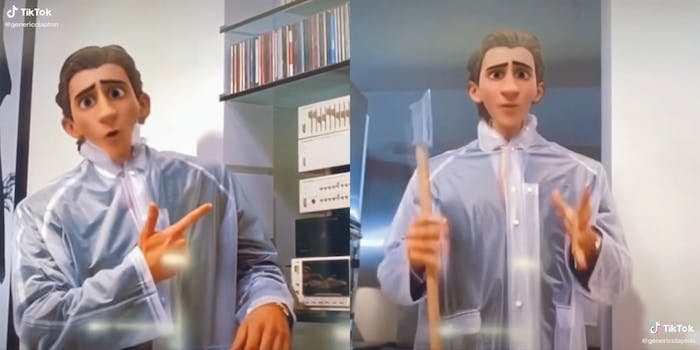 The TikTok Pixar filter on ‘American Psycho’ is good, actually

Pixar gets an R rating.

The Pixar brand is so ingrained in popular culture that we now have archetypes: Pixar dad, Pixar mom. The movies always have a heartwarming, positive message, peppered with carefully plotted emotional moments.

A new TikTok filter, however, elicits some different emotions.

The filter is not a TikTok-specific one, rather a lens on Snapchat, called Cartoon 3D style. While the generic name is perhaps for legal reasons, it’s now called the Pixar filter on TikTok. The #pixarfilterchallenge tag has more than 10 million views.

One creator, who goes by genericclapton, upped the stakes with a series of Pixar-filtered R-rated films. The first was American Psycho, and Christian Bale’s Patrick Bateman is given Pixar dad face in the scene where he explains Huey Lewis and the News to the guy he’s about to murder (Jared Leto). Honestly it just feels right.

Is Jack Nicholson’s character in The Shining the original Pixar dad? Elsewhere, other iconic films were Pixar’d, like Michael Mann’s Heat and Tommy Wiseau’s The Room.

And yes, someone put the filter on Gary Oldman‘s character from 2001’s Hannibal, but view at your own risk.