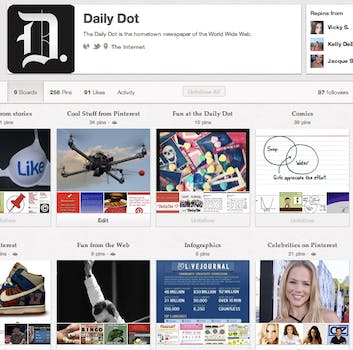 Legally, pinners should only pin images they have the rights to. Now Pinterest's social etiquette says the same thing.

Pinterest’s Pin Etiquette is comprised of five guidelines that set the tone for how pinners use the site. Until cofounder Ben Silbermann announced the changes to the site’s terms on Friday, these five principles originally discouraged self-promotion.

In this screenshot of Pin Etiquette taken last week, the third tenet on the list is Avoid Self Promotion. “[T]ry not to use Pinterest purely as a tool for self-promotion,” it said. 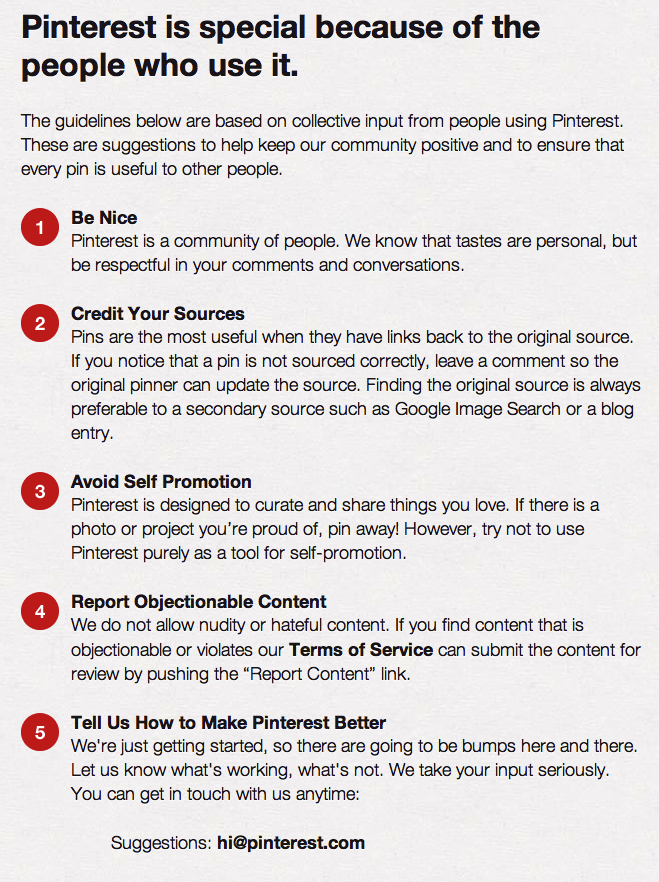 In a screenshot of Pin Etiquette taken on Tuesday, the rules have shifted. The old second tenet is now number three, replaced by the far vaguer request that pinners Be Authentic:

“Pinterest is an expression of who you are. We think being authentic to who you are is more important than getting lots of followers.” 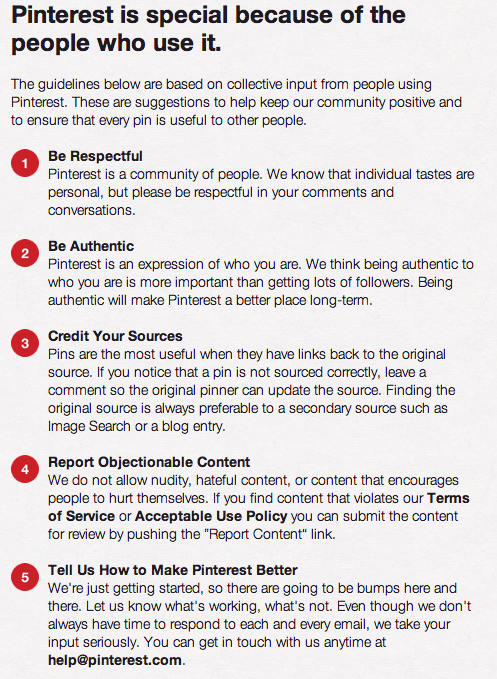 While the original request that pinners avoid self promotion left plenty of leeway with the words “try” and “purely,” many users maintained a strict reading of the rule. Photographer and attorney Kristen Kowalski brought the issue up in her viral post on Pinterest legality:

“Last week another photographer posted a question on Facebook asking if it was okay to pin your own work on Pinterest.  I was surprised to see that many of the photographers who commented back admonished those who pin their own work and even cited Pinterest’s suggested rules of etiquette, which apparently discourage self-promotion.”

Her post earned her a chat with Silbermann but no clear answers until Friday’s change.

After the revisions are implemented on April 6, pinners will no longer be able to point to Pin Etiquette as an argument for or against self-promotion. The directives will also cooperate more easily with Pinterest’s Terms of Service. While the updated terms no longer explicitly state users must own what they pin, the terms state that users’ pins shouldn’t belong to anyone else:

“You therefore agree that any User Content that you post to the Service does not and will not violate any law or infringe the rights of any third party.”

When pin ownership is both a legal requirement and culturally encouraged, it looks like the Daily Dot’s Pinterest Hall of Shame is now defunct. We look forward to this brave, new, more “authentic” era of Pinterest.’