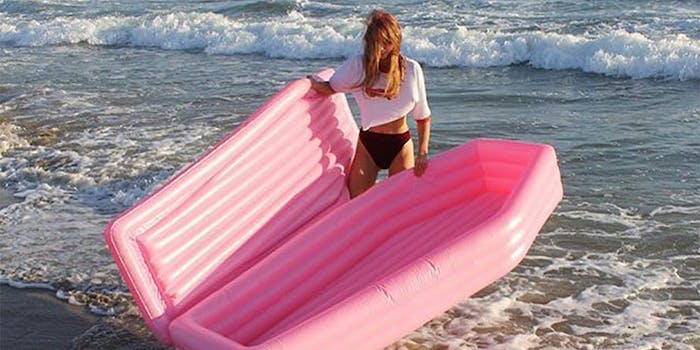 Life's too short for a boring pool float.

Ever feel like pool floats are just too cheery? Do you want to slap grinning flamingos and juicy, colorful fruit in their stupid float faces when you go swimming?

Don’t worry. You’ll never have to choose one of those pool toys again. The pink coffin float is here, and it’s the perfect summer accessory for the nihilist in everyone. It’s exactly what it sounds like, too: a bright pink coffin float meant to whisk you away into the pastel world of creepy cute.

Had the idea to start this project almost three years ago, with my guy @ian__felton. I found someone who could make me a sample recently and pulled the trigger. Super hilarious project. Truth be told thou, we about $15,000 short from being able to sell this to ya’ll. Let us know if you think a kickstarter would be a cool idea or if you have a rich daddy who wanna invest. We taking suggestion no doubt forsure.

It might seem like some super deep art project or a reflection on the ephemerality of life, but nope. It’s just a fun thing someone made, actually. The brainchild of Canadian designer Andrew Greenbaum, the macabre coffin float began life “three years ago,” according to Greenbaum’s Instagram post, with his pal @ian__felton. “I found someone who could make me a sample recently and pulled the trigger,” he wrote in the post. “Super hilarious project.”

It is absolutely side-splitting, and also a little unwieldy. Are you supposed to get in the coffin, float around in it, and then pull the lid over you when you’re feeling ready? Who knows? What we do know for sure is that it’s definitely a big summer mood for those of us who just aren’t feeling life these days.

Someone please stop me buying a coffin pool float when I have neither a pool or a holiday with a pool coming up.

Omg I just saw a float coffin earlier, like for swimming shsgshs

To be buried in a floating coffin that says you're dead, but you're also up for a summer party, wherever you may go. https://t.co/81U4WlY5Gd

when it’s summer but you have depression pic.twitter.com/bmQUGqUBa4

Everyone can’t help but talk about how much they want one.

I have never seen something I want more. A pink coffin pool float…. this is my whole being in an object https://t.co/8ett1uIrew

The only criminal thing about this entire business, in fact, is that it’s not available for purchase at this time. But accordion to Greenbaum, that could change. He’s gauging interest via Instagram for a potential Kickstarter or “rich daddy” who might want to invest in the project.

Who knows? Maybe in a year or so, you could be floating down a lazy river in your own hot pink coffin pool float.